More than 250 Garrett Metal Detectors employees gathered on April 1 to celebrate both the 50-year anniversary of their company and the birthday of its founder, Charles Garrett. 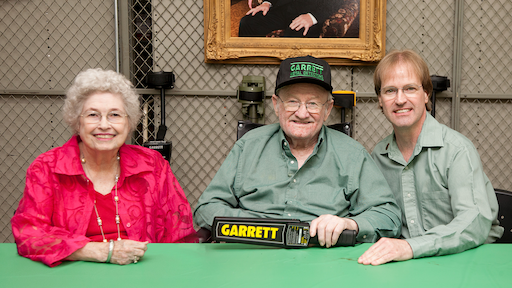 More than 250 Garrett Metal Detectors employees gathered on April 1 to celebrate both the 50-year anniversary of their company and the birthday of its founder, Charles Garrett.

When Garrett, now 82, began designing detectors, his original goal was simply to build a better tool for his own treasure pursuits than what he could purchase. The U.S. Navy veteran and electrical engineer had developed a passion for treasure hunting as a child. His wife Eleanor finally challenged him to either give up his tinkering with electronics or put his inventions on the market.

Charles and Eleanor thus created their company in 1964, initially operating from the garage of their own home. In the early days, the couple was happy to ship only several detectors a month. “Our first sales were made from our home in Garland, Texas,” said Eleanor Garrett. “We built, packed and shipped metal detectors right out of our garage.”

Today, their family-owned business is one of the world’s largest producers of hobby, security and countermine detectors. Garrett security products are used to protect patrons of airports, schools, government, sporting events, hospitals, national landmarks, and corporations. Garrett’s security metal detectors were the first to be used to protect the Olympic Games. Garrett’s hobby detectors have discovered significant history around the world and are featured on television in programs such as the National Geographic Channel’s series “Diggers.”

Although the size of Garrett’s manufacturing facilities has changed over the decades, the operation still remains in Garland, Texas, where it all began. “I feel like I’m at home,” Garrett expressed to the employees who gathered to celebrate his birthday. “I guess that’s because Garrett Metal Detectors has always been like our second home.”

Vaughan Garrett, a company vice president and son of the Garrett founders, spoke at the anniversary celebration. “The two standards that my mother and father used to launch Garrett Metal Detectors were: to provide the best metal detector at a reasonable price and to provide the best customer service, bar none,” he said. “I will add a third standard, and that is to always have our detectors made in America.”

Bob Podhrasky, a senior vice president for Garrett, offered optimism for the future of the company. “The Garretts have always made this a family business,” he said, “and the family of Garrett employees is excited to start working on the next 50 years.”

Most of the drop owed to an 8.5% plunge in single-family housing spending but nonresidential was also negative, weighed down by falling power, commercial and manufacturing
Larry Stewart
July 6, 2020
Latest

It’s never been more important to find new and creative ways to meet revenue goals and maintain stability amid ongoing uncertainty
Jadon Newman
May 28, 2020
Follow Us