The US AWP rental market rebounded with strong growth of 9% in 2013 to reach approximately $7.2 billion, according to the IPAF US Powered Access Rental Market Report 2014. 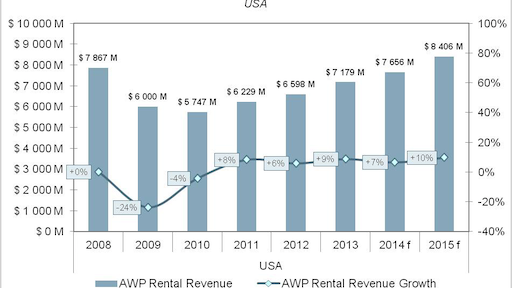 There are now 1,020,000 mobile elevating work platforms (MEWPs), also known as aerial work platforms (AWPs), in the worldwide rental fleet. This is up 6% from the previous year, mainly driven by growth in Asia and Latin America, reveals new research commissioned by the International Powered Access Federation (IPAF).

The US AWP rental market rebounded with strong growth of 9% in 2013 to reach approximately $7.2 billion, according to the IPAF US Powered Access Rental Market Report 2014. The US AWP rental fleet expanded by 6% in 2013. US rental companies used all levers to improve revenue in 2013: expanding fleets and improving rental rates, while enhancing utilization rates.

For the first time, IPAF has conducted research on China, which registered 20% growth. The trend is set to continue in this market where there are approximately 6,000 MEWPs, and scissor lifts make up an estimated 65% of the fleet.

The European MEWP rental market in the 10 countries surveyed remained stable in 2013 (+0%) and is estimated at approximately €2.3 billion, according to the IPAF European Powered Access Rental Market Report 2014. The 10 European countries surveyed were: Denmark, Finland, France, Germany, Italy, the Netherlands, Norway, Spain, Sweden and the UK.

The European rental market shows mixed results and is marked by three groups: those who struggled in 2013 (Spain, the Netherlands, Italy, Finland, and to a lesser extent Denmark and France), those who slightly increased rental revenues (Sweden and the UK), and those who experienced significant growth (Germany and Norway).

“These reports are an invaluable tool and an extremely useful resource for us when planning fleet investments and monitoring how we stack up against our competitors,” said Peter Douglas, UK Operations Director, Nationwide Platforms.

The IPAF rental market reports are presented in an easy-to-read format, highlighting key facts and figures for senior management, such as fleet size, utilisation rate and retention period. They include an estimate of the size of the MEWP/AWP rental fleet worldwide, with a breakdown by region and machine type. New for 2014 is an introduction into the rental market in China, which is covered in both reports. The US report includes Canada. The European report includes seven individual country/regional sections: France, Germany, Italy, the Netherlands, Nordic/Scandinavian countries (covering Denmark, Finland, Norway and Sweden), Spain and UK.

The IPAF US and European Powered Access Rental Market Reports 2014 are available in English and can be purchased at www.ipaf.org/reports