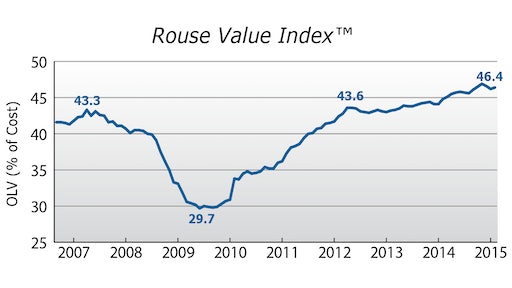 The February Rouse Value Index for used equipment prices increased to 46.4, up 0.5 percent from January values. This is 7.2 percent higher than the prior peak period of 43.3 in April 2007, and 56.5 percent higher than prior trough period of 29.7 in June 2009. The Rouse Value Index measures the average Orderly Liquidation Values for benchmark models across 14 major rental category indices on a monthly basis.

Finally, during December, achieved rental rates as measured by the Rouse Rate Index decreased 0.3 percent on average for the rental companies participating in the Rouse Analytics Rental Metrics Benchmark Service.  Rates are up 3.1 percent relative to December 2013 and up 25.9 percent relative to January 2011. December physical utilization is down 7.9 percent from November.

Get Maximum Value from Aerial Assets