Takeuchi-US has announced that Jimi Martin of Perimeter Takeuchi was presented Takeuchi Salesman of the Year for his successful sales efforts in 2014. 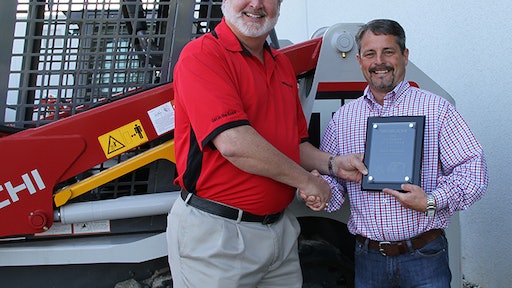 Takeuchi-US has announced that Jimi Martin of Perimeter Takeuchi was presented Takeuchi Salesman of the Year for his successful sales efforts in 2014. The award marks the second consecutive year that Martin was recognized with the accolade after ranking number one again in retail sales for North America.

Located in Buford, GA, Perimeter Takeuchi is a full-line dealer for Takeuchi. They serve the construction and landscaping industries, as well as offer parts and service. Dale McLemore, Takeuchi regional business manager, was on hand in Buford to present Martin with the much-deserved award.

“Jimi Martin exemplifies the meaning of a true sales professional. We could not be happier of the way he represents our brand,” said McLemore. He very much deserves to be recognized for his sales efforts, always going above and beyond the customers expectations as well as Perimeter Takeuchi’s expectations. Jimi is an extremely hard worker, logging long hours each and every day. Something else that sets him apart is that he is a great listener and always understands the needs of his customers. We are proud to again present this award to him for his outstanding performance in 2014.”