JCB has stepped up its support for earthquake-stricken Nepal by dispatching more machines to help the country with its ongoing clean-up operations. 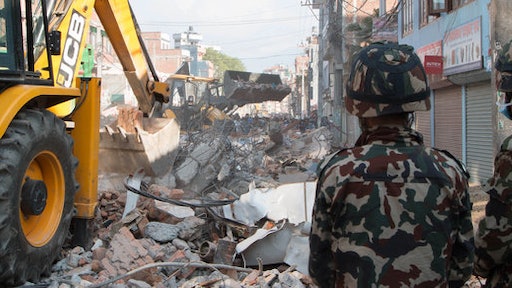 JCB has stepped up its support for earthquake-stricken Nepal by dispatching more machines to help the country with its ongoing clean-up operations.

The news of the $250,000 equipment donation comes after a second earthquake with a magnitude of 7.3 struck the country just after midday on May 12, killing dozens of people and injuring more than 1,000.

The first earthquake just over two weeks ago killed more than 8,000 people and left thousands more homeless. JCB responded by donating $1 million worth of equipment including a fleet of backhoe loaders and electrical generators.

The company is now donating an additional four machines, including compact skid-steer loaders, to respond to current needs in the region. Also included in the donation are a pick-and-carry crane and a Loadall telescopic handler which can lift and load debris in areas devastated by the quakes.

“As the days have gone by, our Nepalese dealer has advised of the need for small and maneuverable machines which can access confined areas and machines which can lift and place heavy loads,” JCB Chairman Lord Bamford said.  “JCB is happy to respond with the donation of an additional four machines, particularly as the country has now suffered a second earthquake.”

JCB is supplying the machines through its dealer, MAW Enterprises Pvt Ltd, in Nepal.

JCB has a long history of helping countries affected by major natural disasters, providing $500,000 worth of machines and generators to the Philippines when Typhoon Haiyan struck in 2013. Machines were also donated when earthquakes struck in Haiti in 2010 and in China in 2008 and to southern India, Sri Lanka and Indonesia in 2004 following the Boxing Day Tsunami.