This new facility nearly triples the square footage available to Pacific STIHL to approximately 140,000 sq. ft. on eight acres, more than doubles its dock doors from eight to 18, and enables it to continue same day fulfillment of dealer orders. 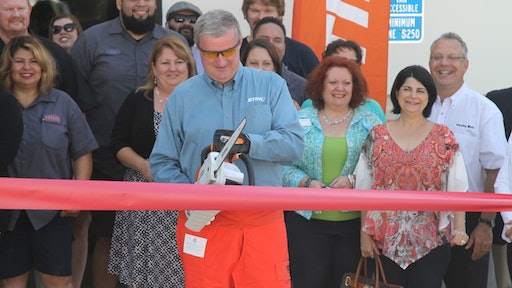 Pacific STIHL, a division of STIHL Inc., recently hosted a building dedication and ribbon cutting ceremony to commemorate the move to the new company-owned facility. This new facility nearly triples the square footage available to Pacific STIHL to approximately 140,000 sq. ft. on eight acres, more than doubles its dock doors from eight to 18, and enables it to continue same day fulfillment of dealer orders. This is the second expansion at Pacific STIHL in five years, thanks to the unprecedented growth of STIHL dealers in its territory. The construction of office space and installation of racking and conveyors took approximately six months.

The expansion represents a significant commitment to the community. Various local leaders and business owners were on hand including the deputy city manager, Eric Frost. Additionally, the local Chamber of Commerce sponsored the Ribbon Cutting ceremony where the ribbon was cut by Larry Blamer, branch manager, using one of the STIHL MSA 200 C-BQ Lithium-Ion battery powered chainsaws.

“Our last move was meant to carry us through 10 years of anticipated growth,” said Larry Blamer, whose territory encompasses STIHL dealers in California, Arizona, Nevada, Hawaii, and Guam. “We’ve outgrown it in five.”

A brief presentation about the STIHL history and company philosophy was followed by a facility tour by Ted Kujawski, sales manager. The design of the new regional headquarters takes advantage of energy efficiencies and incorporates the latest in warehouse distribution technology. It also features expanded training facilities for sales and service training of STIHL dealers from the Pacific STIHL territory, including new dealer orientation, introductory service technician training, and Silver Level STIHL MasterWrench Service Training.