Skyjack has continued its work in the 30 FOR 30 PARTNERS campaign by joining forces with rental company AFI Rent to provide support at a charity basketball game in Hamburg, Germany, which took place earlier this year. 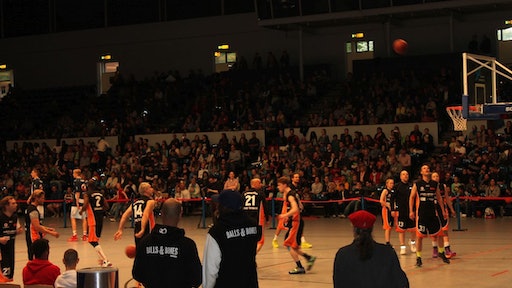 Skyjack has continued its work in the 30 FOR 30 PARTNERS campaign by joining forces with rental company AFI Rent to provide support at a charity basketball game in Hamburg, Germany, which took place earlier this year.

The "AFI Hamburg All-Stars" — a collection of national celebrities from the worlds of football, comedy, film, reality television and ice-hockey — joined together to participate in the event, playing against local professional team the "Hamburg Sharks."

This year marked the basketball event’s 12th anniversary, proceeds from which will support a Hamburg-based charity that helps youths gain the vital qualifications they need to enter employment. In Germany, without a school leaver’s certificate gaining employment is virtually impossible; the charity’s social workers and teachers work closely with underprivileged young people in Hamburg to provide them with the skills and experience they need to succeed.

Giving back to the community

“Supporting grass roots projects that have a real influence over the lives of disadvantaged people is incredibly important,” said Andreas Stumpf, sales manager for Skyjack Germany. “As one of the world’s leading suppliers of access equipment, Skyjack wants to use its position to give something back. And that is what 30 FOR 30 PARTNERS is all about — supporting the projects that will have a life-changing impact on vulnerable people living in the local community.”

One of Skyjack’s vertical mast lifts, the SJ16, was used in the arena where the charity basketball event took place — captain of the celebrity team, Lotto King Karl, and the match’s umpire stood on the unit to inaugurate the game. The SJ16 was also used throughout the game by the umpire as a raised platform from which to adjudicate the match.

With a working height of 6.75 m and a maximum capacity of 227 kg, the SJ16 provided an excellent view as the umpire refereed the game between the ‘AFI Hamburg All-Stars’ and the ‘Hamburg Sharks’. In addition to the SJ16, a Skyjack SJ63 AJ articulated boom was also stationed outside the event’s venue in Hamburg for the 3,000 visitors to see as they entered the court.

Skyjack teamed up with long-standing customer AFI Rent to help provide the two units for the charity game as part of its commitment to the 30 FOR 30 PARTNERS campaign, which launched at the Rental Show in February to mark the company’s 30th business anniversary.

AFI Rent, an access rental company headquartered in Hamburg, operates nine branches in several major cities throughout Germany — including Frankfurt, Hamburg, Hanover and Munich — and is a well-known, trusted supplier of access equipment in the region.

“When we were given the opportunity to support this fantastic event, we jumped at the chance,” said Günther Aust, CEO of AFI Rent. “Everyone deserves a second chance in life. Together with Skyjack, AFI Rent is able to offer young, disadvantaged people in Hamburg another opportunity to start their career.”

“Maintaining social responsibility is extremely important to Skyjack, and we were delighted to offer our support to such a worthwhile charitable social project,” Andreas said. “The event has been a great way to have some fun while raising awareness and funds for this significant initiative.”

Skyjack is on the search for 30 worthwhile projects, spread across the world, which could benefit from the use of a Skyjack machine. The machines, plus assistance, are supplied through Skyjack customers and Skyjack covers all costs up to $2,500 per project.

For more information about the 30 FOR 30 PARTNERS project, visit: www.skyjack.com/30for30.