Shortlist of Nominees for 2016 IAPAs Announced

The shortlist for this year’s International Awards for Powered Access (IAPAs) has been revealed, following the judges’ meeting on Jan. 28 in Basel, Switzerland. The winners will be announced at the dinner and awards ceremony on March 17 in Madrid. 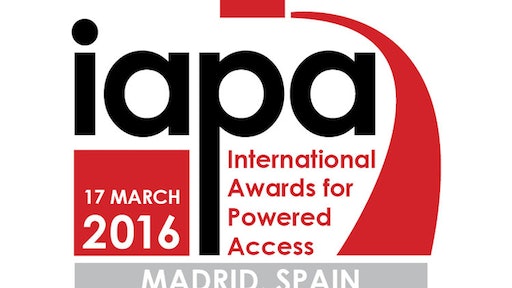 The shortlist for this year’s International Awards for Powered Access (IAPAs) has been revealed, following the judges’ meeting on Jan. 28 in Basel, Switzerland.

The winners will be announced at the dinner and awards ceremony on March 17 in Madrid, Spain.

Jointly organized by Access International and IPAF, the IAPAs celebrate best practice and excellence in the powered access industry.

More than 100 entries across 13 award categories were received for the IAPAs 2016.

“There was a great range of entries from around the world,” said Euan Youdale, editor of Access International, and non-voting chairman of the judges. “The judges invested considerable time marking all the entries, and discussing and evaluating the merits of the submissions. It was a productive and enjoyable meeting, and we thank the judges for all their efforts.”

The IAPAs take place on the same day as the IPAF Summit and regularly attract audiences of more than 450 each year. Make sure you are part of it by booking your place at www.iapa-summit.info

IPAF Instructor of the Year

Product of the Year – Self-propelled above 20ft/6.1m

Product of the Year – Self-propelled below 20ft/6.1m

Product of the Year – Vehicle/trailer mounted

Project of the Year

The independent and impartial judges made their decisions based on the merit of each entry and are excluded from entering their company for any awards. The judges thank all those who took part and would like to encourage everyone in the industry to consider entering again for the awards in 2017.