Skyjack won the award of Top Corporate Team for their fundraising efforts at the Canadian Breast Cancer Foundation’s annual CIBC Run for the Cure on October 4, 2015. 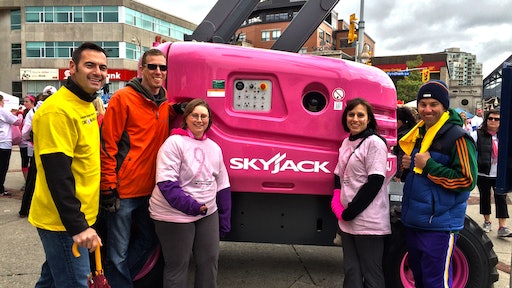 Skyjack won the award of Top Corporate Team for their fundraising efforts at the Canadian Breast Cancer Foundation’s annual CIBC Run for the Cure on October 4, 2015. The aerial work platform, lift, and telehandler company donated $2,500 to the foundation as a part of their local sponsorship of the event in Guelph. As well, Skyjack provided the use of a SJ63 AJ, an articulating boom, for photographers to capture aerial photos of the run in Toronto.

The 115,000 participants and volunteers of the event raised a total of $21.5 million. With this money, CBCF will fund innovative research, health education and advocacy programs that aim to reduce the incidence of breast cancer, lower mortality rates and support women and their families who have been affected. The foundation funds research aimed at earlier detection, improved diagnosis and more effective treatments, which has helped reduce mortality rates by 44 percent. Skyjack supported CBCF this year as part of its 30 FOR 30 PARTNERS campaign, which celebrates the company’s 30th anniversary in business.

“Skyjack has been a long-time supporter of CBCF,” said Skyjack President Brad Boehler. “We have participated in and sponsored the event since 2011, as well as both Skyjack and Linamar employees serving on the Guelph Run site organizing committee. With several employees being impacted by breast cancer, we enjoy participating in the event each year, and found it to be a perfect event to highlight with our 30 FOR 30 PARTNERS campaign this year.”

The SJ63 AJ provided multiple functions at the CIBC Run for the Cure. The Skyjack machine helped lift photographers close to 70 feet in the air to capture aerial photos of the event. Skyjack’s machines have also been used to put up and take down the “Start/Finish” banner at the run in Guelph the past couple of years.

The pink boom used at the event has always been a popular site at the foundation’s run in Guelph, since it is located front and center beside the “Start/Finish” line.

The articulating boom is typically used for construction and industrial applications that require superior reach capabilities, at height, horizontal reach, or up and over clearance. The machine has a raised platform height of 63’7” and a working height of 69’7”. With the capability to achieve a 360° continuous rotation, the SJ63 AJ was the perfect tool to capture aerial photos of the run in Toronto. The machine is meant to be used by only 1-2 people, with a maximum capacity of 500 pounds.