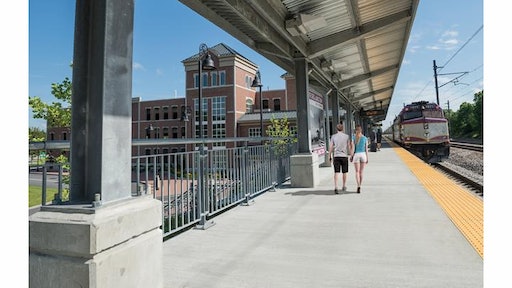 Better overall performance, an aesthetically pleasing finished appearance and enhanced sustainability are among the hallmarks of three types of Lafarge North America cement used in the construction of the Wickford Junction Commuter Rail Station in North Kingston, RI.

NewCem is also notable for its environmental benefits. It makes use of an industrial by-product material that might otherwise end up in landfills, and avoids the use of virgin raw materials. The resulting lighter-colored, high-performance concrete mix also absorbs less heat from solar radiation, giving it an extended service life and lower life cycle costs.

The more than 250,000-square-foot multimodal commuter rail station includes a parking garage, public lobbies and a café, and features a distinctive “millwork building” façade that is reminiscent of early 20th century New England textile mills. Functionally, it is an important component of extending Northeast Corridor rail service, and an excellent example of how Lafarge infrastructure solutions contribute to building better, more connected cities. The station has helped extend commuter rail service from southern Rhode Island to Warwick, Providence, Boston and beyond, and relieved traffic congestion along the Route 4/I-95 corridor.

LaFarge Gives Back for the Holidays

Dow has installed their recycled plastic-modified asphalt mixtures on several roads and parking lots in the country, proving these mixtures to be a viable option in sustainable pavement design and construction
Jessica Lombardo
November 2, 2020
Follow Us