Get More Payload Per Dollar 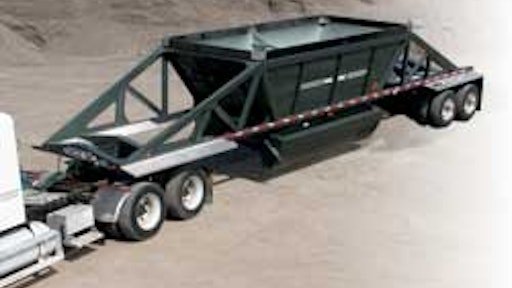 Bridge laws are a fact of life for many of today’s dump truck operators.

Federal highways are governed by the federal bridge formula, which uses a mathematical formula to calculate legal axle weights and spacings. This is complicated by the fact that state requirements vary. “Some states have more restrictive laws (aligned with the Federal Bridge Formula). Others have more liberal laws that abide by the Federal Bridge Formula on the interstate highways, and allow greater payloads on fewer axles or less distance between the axles on roads other than interstate highways,” explains Scott Smith, Flow Boy.

Where you are located and which roads you use to haul loads will determine the most productive dump truck/trailer solution. If in doubt, it is always advisable to seek the advice of a local dealer who is familiar with the regional regulations.

When facing the Federal Bridge Formula, dump trailers offer a productive solution to straight trucks. “By giving a greater distance between the axles or groups of axles, the unit (truck and trailer) is allowed to carry a greater legal payload, per the bridge formula,” says Smith.

Starting out with an excavator, a dozer, a semi tractor and a lowboy, Dave Youngren chose a Circle R Side Dump trailer for his operation instead of a traditional dump truck. “Instead of buying a dump truck, I wanted to utilize the license and the truck I was using to pull the lowboy,” he explains.

The side dump trailer was the best fit for Youngren’s application. “The company that I worked for before used end dump trailers,” he notes. “If you are not exactly level, you will tip them over. You had to basically load them from behind or you would not get the load centered and they would want to tip over.”

The side dump also maximizes versatility. “This does not have a tailgate that debris is going to get hung up on,” explains Youngren. “You can basically haul anything in them. The only downfall would be spreading rock.”

Youngren Excavating continues to grow, adding a second Circle R Side Dump last year. The two semi trucks pulling trailers provide the capacity Youngren needs without excess capital tied up in equipment. “When I am loading dirt with an excavator, the capacity I am getting is basically the same capacity as four dump trucks,” says Youngren.

And that does not take into account the faster cycle times. The side dump cycles faster than a conventional dump truck because it doesn’t have to be backed into position.

Dump trailers come in many forms. End dumps, live bottom dumps, side dumps and bottom dumps are among the most popular. Choosing the correct trailer really depends on what materials you plan to move and how the jobsite is set up.

“The trend in the dump trailer market is people definitely want to get more payload, but they don’t want to give up versatility,” says Dean Badinger, division sales manager, Trail King/Red River. End dumps are among the most versatile trailers on the market, capable of handling a wide array of materials. But to maximize the payload with an end dump under the bridge laws, you need to use longer trailers. This is where stability can become an issue.

“The downside of the end dump is in order to get to 80,000 lbs., you are typically dealing with a 38-- or 39--ft. end dump,” says Badinger. “When you lift that big a trailer up in the air, you have to be in a pretty stable environment. You always have the threat of tipping over.”

The dump site must be kept fairly level. “Hopefully, one side is not softer than the other,” says Badinger. “When you take that dump trailer up in the air, you are transferring a lot of weight to those back axles. If the ground on the driver’s side is softer than on the passenger side, it can start sinking. The next thing you know, you start tipping.

“If you are going into rougher terrain and you still want to use an end dump, typically you will shorten it up so there is not so much up in the air,” Badinger adds. The shorter trailer also allows greater maneuverability on the jobsite.

Another issue you may want to investigate is insurance costs. “We have heard with live--bottom trailers -- and I am sure it plays over to belly dumps and possibly side dumps, too -- that your insurance is typically less than with an end dump,” says Badinger.

An increasingly popular alternative to end dump trailers is the side dump. “There is a gravitation toward side dumps in a lot of markets in the Midwest,” says Badinger. “They are a little more versatile when it comes to hauling product like rip rap.”

Therefore, trailer length is not as much of an issue in terms of stability.

Unlike a belly dump trailer, the side dump doesn’t drag its axles over the material being unloaded. “It dumps outside the frameline,” says Anderson. This means the operator doesn’t have to get out of the truck to make sure the tops of the trailer axles are clean. “With the bottom dump, after you get off the pile, you have to get out and make sure you don’t have any rock on the axle,” says Anderson. “You don’t want that rock picking off somebody’s windshield.”

A bottom dump trailer leaves a ribbon of processed material. “It is one of the lightest and least maintenance intensive,” says Badinger. “You are not dealing with any hydraulics. All you are dealing with is two air cylinders.”

The light weight is a definite advantage. “If you are hauling sand, gravel and asphalt to a project, the lighter you are, the more you can haul,” says Badinger. To address this demand, Trail King recently introduced the Ultra Light belly dump (10,000 lbs.), which uses a stronger grade steel with thinner walls and structures to save weight.

Live--bottom trailers are also gaining market share from end dumps. “In the Eastern part of the United States, and the Northeast specifically, the live--bottom trailers have a niche because you are not lifting the end dump in the air when you are carrying the heavier loads allowed over there,” says Badinger. “It’s a finish product trailer.”

These trailers actually help improve paving quality. “You are not segregating your materials because you are not lifting your trailer up in the air,” says Badinger. “When they slide, materials will tumble. The bigger rocks tumble faster and they separate. In a live bottom, you just meter it out.

“You don’t deal with lifting the box up into the air and you don’t have to worry about overhead obstructions like a bridge or power lines,” he adds.

For many contractors, the total turn time is a critical measurement as it determines how many trips you can make in a day. “The folks that are bidding contracts here in the traditional Midwest or the Mountain West measure total turn time -- time to haul, dump and return,” says Anderson.

The cycle time to dump the trailer and return to the transport position has a major impact on total turn time. The shorter the haul distance, the more the cycle time will impact the total time required. “If the average haul distance is two to 10 miles, then dumping in 30 seconds is much more important than dumping in a couple of minutes,” explains Anderson.

End dump trailers usually take a couple of minutes to complete a dump cycle. “You have to find a good spot, back up, make sure you are level, take it up in the air, dump and go,” explains Badinger.

By comparison, the side dump trailer cycles more quickly. “We state in our tech pubs a 30--second cycle time,” says Anderson. “That is time to offload -- about 20 seconds -- and 10 seconds to return back to transport position. With a side dump, you never have to stop to unload.”

Bottom dump trailers offer comparable cycle times when you are hauling aggregate or stringing out base course. “They drive up, slow down, open their gates, dump and 20 seconds later they are gone,” says Badinger.

For paving operations, the live--bottom trailer is very efficient. “You back up to the paver, hit the switch, then unload as fast as the paver will take it,” says Badinger.

The goal is to achieve maximum payload and quick cycle times while maintaining the versatility necessary for your jobsite. “It really boils down to cost per unit, which is cost per ton mile. If you can become more efficient in the cost per ton mile, then you are going to get awarded those contracts,” says Anderson.

Many factors determine whether a traditional dump truck or a dump trailer is the best solution for your jobsites. Listed below are a few advantages of each:

Tarp Loads for Safety and to Reduce Liability Risks

For construction contractors, there is more to tarping loads than legal requirements. There is also the liability if flying debris causes an accident or property damage.
Curt Bennink
May 17, 2019

Swint brings over 17 years of experience in operations, management and leadership to the position
Travis Body & Trailer Inc.
August 24, 2017

The 3D Series - Drop-Deck & Dump trailer from Airtow is a ground level loading equipment trailer, a utility trailer and a dump trailer all wrapped into one.
Rock Line Products
December 15, 2014