Mack Command Steer reduces driver fatigue and can help cut muscle strain up to 30 percent by combining an electric motor with the existing hydraulic steering. 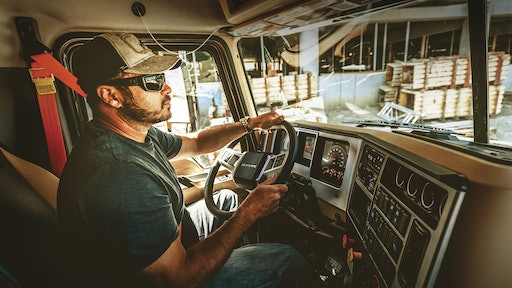 Mack Trucks is helping reduce the effects of the rigorous demands of the jobsite by bringing its highly advanced Mack Command Steer active steering system to Mack Granite axle back models.
Mack Trucks

“Driving a fully loaded, heavy-duty construction truck is a physically demanding task, especially when you add the uneven terrain common to most jobsites,” says Roy Horton, Mack Trucks director of product strategy. “With the added steering assist from Mack Command Steer, we are able to reduce driver effort by 85 percent and significantly improve driver productivity and jobsite safety.”

Mack Command Steer monitors terrain, driver inputs and environmental elements more than 2,000 times per second through sensors found throughout the truck. Based on that input, the system provides variable steering effort through its electric motor, which applies additional torque as needed to the steering.

In addition to significantly reduced steering effort at slow speeds, Mack Command Steer also helps filter out uneven terrain such as the holes, dips and ruts common to most jobsites. When such an irregularity is detected, the system reacts to counter the steering force, smoothing steering feedback and reducing the possibility of steering wheel “kicks.”

“While drivers will experience a significant reduction in steering effort, particularly on uneven jobsite surfaces, Mack Command Steer brings many benefits to on-road driving as well,” Horton said. “The system will also compensate for situations, like strong winds and crowned roads, helping drivers maintain greater control so they can focus on the task at hand.”

Mack Command Steer also features a unique return-to-zero capability that automatically returns the steering wheel to the zero or center position in forward and reverse. This helps simplify tight maneuvers, such as backing a trailer or positioning a dump or mixer to unload.