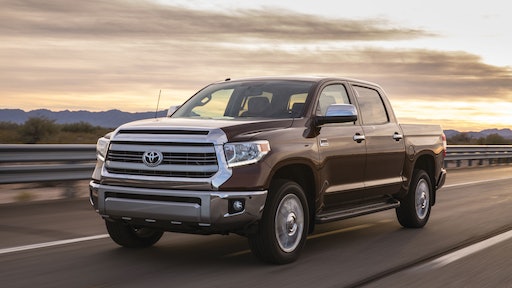 The 2014 Tundra will be completely redesigned, representing the first major change since the launch of the current generation for the 2007 model year.

The vehicle will offer unique features, including a new Blind Spot Monitor with Rear Cross Traffic Alert, a standard back-up camera (viewed from the audio display screen) and standard Bluetooth. Additional standard features include a 3.5-in. multi-information display in the gauge cluster.

Several enhancements have been implemented on the 2014 Tundra to improve performance. Shock-absorber valving has been re-tuned to improve ride quality over harsh surfaces. Steering feel and straight-line stability have been enhanced via steering system improvements that reduce the inputs from road variations and imperfections.

Aerodynamic stabilizer fins have been added to the outside surface of the rear tail lamp lens and the outside mirror bases. These “Aero-Fins” reduce the air turbulence along the sides of the vehicle, resulting in improved straight-line stability during normal driving conditions and while towing.

The Tundra continues to offer three proven powertrains. A 4.0-liter Dual Overhead Cam (DOHC) V6 is standard on Regular and Double Cab models and produces 270 hp and 278 lbs.-ft. peak torque. It is paired with a five-speed automatic transmission with uphill/downhill shift logic.

All three engines feature an aluminum cylinder block and DOHC heads, along with Dual Variable Valve Timing with intelligence (VVT-i) for a broad torque curve and optimized efficiency.

Strategy Based on Grades

The 2014 Tundra will have a grade strategy consisting of the SR, volume-leading SR5, the well-appointed Limited and two premium grades: “Platinum” and the all-new “1794 Edition.” The 1794 Edition is a tribute to the ranch, founded in the year 1794, on which the Tundra plant is located in San Antonio, TX.

The vehicle is offered in two-door Regular Cab, four-door Double Cab and four-door CrewMax cab styles, all available in 4x2 and 4x4.