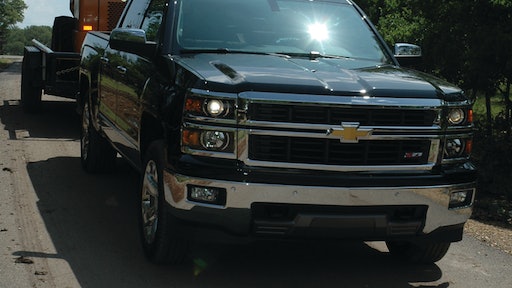 The V-8 equipped Silverado proved up to the task, towing this 8,000-lb. load with no ill handling and easily maintaining 65 mph on the freeway.

General Motors' December sneak peek at the 2014 Chevrolet Silverado 1500 may have backfired, as many in the automotive media were underwhelmed by the hood-to-hitch redesign's cosmetics. But in early May GM invited Equipment Today to San Antonio to get behind the wheel, where the driving experience demonstrates the dramatic departure that the 2014 model represents.

Video: Walk Through the 2014 Silverado at the Work Truck Show

GM kicked off the ride-and-drive event with a genuine surprise, pulling the wraps off the brand new Chevrolet High Country model. With its fall debut, the High Country will be the first Silverado to compete in the lucrative premium-pickup market against Ram's Longhorn and Ford's Platinum, along with the GMC Denali.

Sizing up the Silverado 1500

The engine is the heart of any work truck. General Motors' first hood-to-hitch rework of its 1500 Series pickup trucks in several years delivers an all-new set of EcoTec3 engines marrying GM's proven small-block design with all of the company's fuel-saving technologies for the first time in a pickup.

Engine choices will include a 4.3-liter V6, a 5.3-liter V8 and a 6.2-liter V8. Each engine features standard direct injection, continuously variable valve timing and Active Fuel Management, which means they automatically switch to running on four cylinders during light-load driving to save fuel. These technologies will be standard on every Silverado and Sierra and work together to precisely control the burning of fuel in the cylinders.

Video: How Chevy Turns a V8 or V6 into a Four-Cylinder

Many of the refinements to the 2014 Silverado are not visible from the exterior. Much effort was spent on improving noise, vibration and handling (NVH) measures; aerodynamics and systems integration. The result is a pickup that is more impressive once you actually turn the key.

We had a chance to operate the trucks throughout Texas Hill Country both unladen, with a payload in the bed and pulling trailers from 6,000 to 8,000 lbs.

Had I not known the truck used electronic steering, I would never have guessed. Steering feedback is as good as most hydraulic steering systems; you never get the sense that there's a printed circuit board between you and the road. Plus the electronic system can alter the required steering inputs based on speed, so the truck safely turns more quickly when it's going slower. Most importantly replacing the hydraulics with an electrical system reduces parasitic load on the engine, which helps improve fuel economy.

Typical of modern pickups, the ride was more like a passenger car than a truck – quiet and smooth with no rattles or oscillations. I had a chance to pull an 8,000-lb. skid-steer and trailer combination with the V8 EcotTec3 engine. In tow-haul mode the truck shifted smoothly and there was plenty of torque to move the payload and respond to demand at highway speeds. The truck never seemed strained pulling the load at 65 mph, and the suspension was also up to the task, providing a solid feel.

A recent rain had left the off-road trail slippery; it was more of a two-track dirt road with some rocky sections. The suspension kept occupants comfortable even as the truck bounced over the rocks. New shear mounts under the front and middle of the cab isolate cab movement in vertical and lateral planes. Crew-cab and extended-cab models have viscous rear mounts tuned to prevent oscillations when driving down the highway.

Video: How the 2014 Chevy Silverado Handles a Rocky Climb

Placing the selector switch in auto mode allowed the truck to switch automatically between two-wheel drive and four-wheel drive as needed. The changes were seamless.

We tested the grade descent control, which effectively held your desired speed coming down hills. The system uses the anti-lock braking system for a smooth, controlled descent down steep grades.

Gauges and the information cluster provide a wealth of information. Everything you would ever want to know is right at your fingertips and readily available. Widgets accessible from the MyLink touch screen offer acces to the various information funcitons available on the center console. And MyLink allows you to arrange the widgets that show and the applications that launch automatically much like a smart phone's screens.

Among the readily available information is a display that shows when the engine is running in eight- or six-cylinder mode versus four-cylinder mode. The unloaded V8-equipped model cruised comfortably much of the time in four-cylinder mode, idled and accelerated in eight-cylinder mode. If not for the dashboard indicator, you would not notice transitions between modes. You can’t feel or hear the changes.

A 2013 model Silverado was parked beside the 2014s to highlight the differences. While GM made much of the exterior restyling, I think the greatest advancements lie below the surface.

The differences are most apparent when you climb in the cab and get the vehicle under way. The new generation Silverado 1500 is definitely a better-riding, more-capable and inevitably more-efficient pickup truck.

Pickups Compete for King of the Hill