How likely are steering and fuel-efficiency advancements on the new Ford crossover to be used on the popular pickup truck? 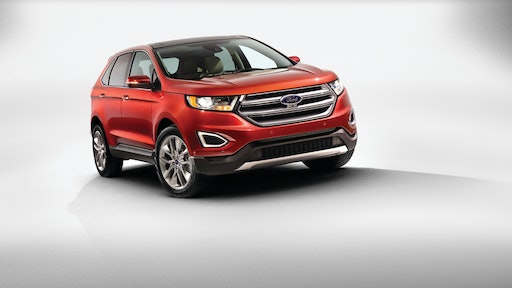 What does a crossover utility vehicle have to do with the truck market? More than meets the eye. The 2015 Ford Edge, introduced last week was packed with new technology, some of which is certain to migrate to Ford's F-150 and other pickup trucks.

One of the most obvious technologies that may soon find its way onto the Ford F-Series trucks is adaptive steering. The 2015 Edge is the first Ford product to feature the technology, which makes the vehicle easier to maneuver and more fun to drive.

The system enables Edge to react more smoothly and precisely to driver input at highway speeds by reducing the degree of response to the steering wheel.

The Ford system uses a precision-controlled actuator placed inside the steering wheel, and requires no change to the vehicle’s traditional steering system. The actuator – an electric motor and gearing system – can essentially add to or subtract from a driver’s steering inputs. The result is a better, more engaging driving experience at all speeds.

Ford’s Auto Start-Stop system will also be available with the twin-scroll EcoBoost engine on the new Edge. In heavy traffic, this technology can seamlessly shut down the engine to decrease fuel consumption, reducing tailpipe emissions to zero while the vehicle is stationary and the engine is off.

Could the twin-scroll design or Auto Start-Stop be adapted for pickup truck applications? We will have to wait and see.

Finally, Ford displayed enhancements to its 2.7-liter EcoBoost which is expected to deliver more than 300 horsepower.

The 2.7-liter EcoBoost uses the same compacted graphite iron in its cylinder block as is used in the 6.7-liter Power Stroke. This advanced cylinder block allows for a remarkably stiff and compact design that returns exceptionally refined noise, vibration and harshness control. The compacted graphite iron core is mated with a die-cast aluminum engine-block ladder frame and composite oil pan, saving weight by applying advanced materials where they are needed most.

The strength of the compacted graphite iron cylinder block allows the 2.7-liter EcoBoost engine to produce impressive power and torque for its size. Compact and efficient, the all-new engine can produce the power and torque of a mid-range V8.

Other technologies on the 2015 Ford Edge that have potential applications for future pickup trucks include: