The third generation EcoDiesel is a fresh design with over 80% new components. 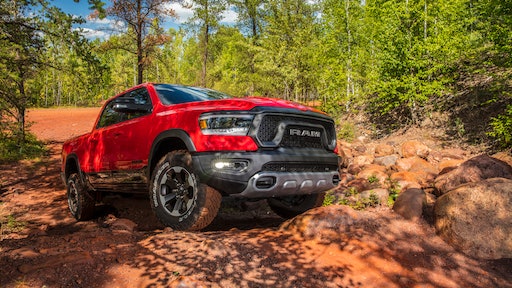 The Ram 1500 Rebel EcoDiesel is equipped with many features which enhance off-road performance, such as an air-suspension system, differential lock and Hill Decent Control.
Ram Trucks

With the dust-up over EPA emissions compliance with the previous generation EcoDiesel firmly in the rearview mirror, Ram Trucks is launching the third-generation EcoDiesel into its 2020 model year 1500 pickup line. The previous 3.0-liter V6 EcoDiesel was well accepted, earning “Wards 10 Best Engines” for three consecutive years from 2014 to 2016.

But the latest EcoDiesel is not a warmed-over version of the previous offering. It is a fresh design with over 80% new components. This includes revolutionary technologies such as a low-friction Diamond Like Coating (DLC) on the piston pin and piston side skirts to reduce friction and a 0.3 mm piston pin offset to reduce piston noise caused by piston slap. Piston slap is a major contributor to that classic “diesel” sound many of us have grown accustomed to over the years.

The current EcoDiesel pumps out a class-leading 480 lbs.-ft. of torque at 1,600 rpm and 260 hp at 3,600 rpm. Compared to the previous generation EcoDiesel, the new powerplant produces 14% more torque and 8% more horsepower. It uses dual overhead camshafts (DOHC) with four valves per cylinder and a 60˚ angle between the cylinder banks. The block is cast with compacted graphite iron, which provides strength to dampen vibrations but weighs less than grey cast iron. If fact, engineering was able to carve an additional 15 lbs. from the previous generation compacted graphite iron block.

The simple fact is 1/2-ton pickups are often used as daily commute vehicles, where comfort and drivability take priority over towing and payload performance. For the test, we were allowed to drive a very nicely equipped Ram 1500 Laramie Longhorn down the Interstate and around the twisty roads outside of Duluth, MN. We were able to rack up more that 160 miles on varying surfaces with trucks that had no payload other than a pair of drivers.

The first impression that struck me was the noise, or lack thereof. At idle outside of the truck, you will not mistake the sound for anything but a diesel, but it is very quiet. Sit in the cab and close the door and the diesel noise seems like a slight murmur in the background, though you still can identify it as the unmistakable sound of diesel power. Putting the truck in gear and driving away yields a pleasant surprise — the engine almost seems to go silent until you really punch the throttle.

I have driven quite a few diesels over the years, and usually they display a lack of throttle response. There is often a slight hesitation between the time you press the throttle and the response as the engine turbo spools up. This is not the case with the EcoDiesel. Throttle response is almost instantaneous. Between the quiet interior and the quick throttle response, you almost have to remind yourself that you are driving a diesel and not a gasoline-powered truck.

Speaking of fuel economy, the main reason there has been a proliferation of diesel engines in the 1/2-ton pickup market has been in search of fuel efficiency in this highly competitive market segment. Recently introduced products from competitive brands have pushed the benchmark past 30 mpg. While Ram is still waiting for official fuel economy numbers, the company is confident it will be very competitive.

One other noteworthy feature that came in handy was the 12-in. Uconnect touchscreen. Although it has split-screen functionality, I appreciated the ability to use the full screen for navigation. It really allowed you to focus on the road. A quick glance at the large screen was all that was needed to make sure you didn’t miss your next turn.

To get a better feel for off-road capability, Ram let us take a diesel-equipped Rebel through an off-road trail at the Iron Range Off-Highway vehicle park. The course proved pretty intense with slick, steep grades, large mounds to test the breakover point and a deep water crossing.

The Rebel was equipped with many features that enhance off-road performance, such as an air suspension system, differential lock and hill decent control. Due to the nature of the course, first thing before hitting the trail, I shifted the truck into the four-wheel-drive low range, where it remained for the duration of the course, and I raised the air-ride suspension into the off-road mode.

The first test was the breakover test. A spotter was available since the sky was pretty much all that was visible out of the front windshield. The throttle response was easy to modulate to smoothly climb up and over the breakover point.

This was followed by a couple of steep ascents and downhills. On the first steep uphill, the engine response caught me a little off guard. I was carrying momentum up the hill when I felt the truck slowing a little. I pressed on the throttle a little too heavy and the truck responded by briefly spinning the tires while still maintaining momentum up the hill. This truck really does respond more like a gasoline-powered alternative.

On the downhill, I had a chance to test the hill decent control. I dialed it in for 2.6 mph and it took a lot of the stress out of the steep downhill grades, although I am not used to the sound of the brakes automatically controlling the decent. It may have been due to the water crossing prior to the downhill decent, but the automatic control of the brakes when descending a very steep hill almost sounded like grinding gears. It really gets your attention until you realize what the sound is and that there is nothing wrong with the driveline. It almost has the same feel as when the anti-lock brakes activate.

Overall, the EcoDiesel Ram proved very competent off road, especially when you consider this was a stock truck without any aftermarket add-ons to tailor it for off-road use.

The same Longhorn Lariat I used for the commuting impressions was then hooked to a trailer pulling two Yamaha UTVs. This was hardly expected to tax the truck since the Ram 1500 equipped with an EcoDiesel has a maximum 12,560-lb. towing capacity and the trailer with two UTVs weighed in at 5,150 lbs. Torque for towing is one of the major benefits of the diesel powertrain. Ram claims that the diesel customer in this size class is different than the gasoline customer. They are 23% more likely to tow.

After setting the trailer tow mirrors, I engaged tow/haul mode on the eight-speed Torqueflight automatic transmission. The truck got on step quickly as the throttle was advanced. Accelerating away from stoplights and keeping pace with traffic was pretty effortless. The Laramie Longhorn did a good job of keeping the trailer under control during braking and cornering. This can partially be attributed to the link coil rear suspension system with active-level four-corner air suspension.

You could tell there is a diesel under the hood during the towing exercise. Unlike when driving the truck unladen, the muted sound of the diesel engine was always present. But overall, it is amazing how quiet the interior cab space has become. Ram has concentrated a lot of effort on noise reduction in both its powertrains and chassis, including installation of acoustic glass to keep the cabin quiet.