Differences between today’s F-150 and GM and Ram 1500s very close, but the entire class is far more efficient and capable than models from just a few years ago 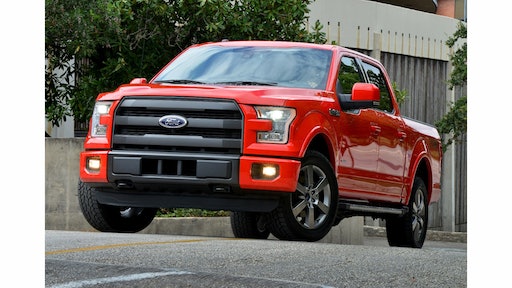 To improve fuel economy, Ford cut up to 700 lb. from the truck using high-strength steel in the frame and high-strength, military-grade, aluminum alloys to make the body. That weight savings improves the 2015 F-150’s cargo and towing capability, too.

Of course most construction trucks are bought with four-wheel drive, and the 2015 F-150 tops out the gasoline 4x4 configurations, too. Powered by the 2.7-liter EcoBoost, it gets 18 mpg city, 23 mpg highway and 20 mpg combined.

And the towing and payload capabilities of these most-efficient half-tons all fall within a pretty tight range as well (see the table above).

Ram’s 1500 4x4 powered by the 3.0L V6 EcoDiesel does open up some advantage, particularly in terms of highway mileage, on the gasoline competition – 19 city/27 highway/22 combined. And it does deliver about 1,500 lb. more towing capacity than the other fuel sippers.

Cost is a very real issue in this fuel-economy competition. GM’s most-efficient engine, the 4.3L EcoTec3 V6 is standard equipment on the Chevrolet Silverado and GMC Sierra. Ford gets about a $500 premium for the 2.7L EcoBoost. And Ram’s EcoDiesel comes at a $4,500 cost premium on the Ram 1500. With such a tight range of economy numbers between today’s half-ton pickups, there are few real-world ROI scenarios that would justify extra investment on fuel savings alone.