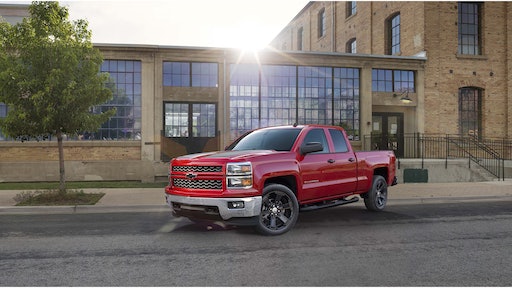 GM engineered its new Hydra-Matic 8L90 eight-speed transmission with 11% greater torque capacity to manage the 420 hp and 460 lb.-ft. of torque developed by the 6.2L EcoTec3 V8 engine available in Silverado 1500.

General Motors developed its new Hydra-Matic 8L90 eight-speed transmission with 11% greater torque capacity than the 6L80 six-speed automatic transmission to manage the output of the 6.2L EcoTec3 V8 engine available in the 2015 Chevrolet Silverado 1500 pickup. The 6.2L V8 – at 420 hp and 460 lb.-ft. of torque – is the most powerful engine offered in a light-duty truck.

“The new 8L90 eight-speed is designed tougher to handle the greater power of the Silverado’s powertrains, with great improvements in spin loss to complement that capability with greater efficiency,” said Kavoos Kaveh, global chief engineer for eight-speed automatic transmissions. “It is a marvel of packaging efficiency and driving efficiency that has garnered more than two dozen patents for General Motors.”

EPA estimated fuel economy will be announced closer to the start of 2015 Silverado 1500 production in the fourth quarter of 2014.

The 2015 Silverado 1500 equipped with the 6.2L engine and eight-speed automatic transmission will have a maximum available trailer rating of 12,000 lb., based on SAE J2807 Recommended Practices.

Smaller steps between gears, compared to the 6L80 (see chart), keep the engine running more in the sweet spot of its speed band, making the most of its horsepower and torque to optimize performance and efficiency. They also enable numerically lower rear axle ratios, which reduce engine rpm on the highway for reduced fuel consumption.

Friction-reducing features – including all-new synthetic fluid – and lower spin losses via a powerflow that uses only two open clutches contribute to efficiency. A new torque converter design with turbine damper enhances refinement, particularly during low-speed gear changes, for smoother performance when the truck is loaded or pulling a trailer.