The Ram 1500 Crew Cab full-size pickup has been named a Top Safety Pick+ for 2019, the highest rating given by the Insurance Institute for Highway Safety (IIHS). 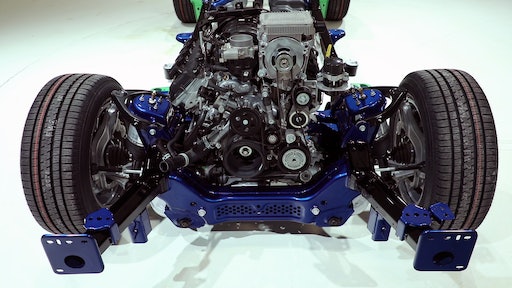 The 2019 and 2020 Ram 1500 Crew Cab full-size pickups have been named a Top Safety Pick+ for 2019, the highest rating given by the Insurance Institute for Highway Safety (IIHS).The rating applies to trucks produced after May of this year, when equipped with adaptive LED projector headlamps that have high-beam assist and Ram’s Automatic Emergency Braking (AEB) technology, Forward Collision Mitigation.

The Ram 1500’s safety story begins with innovations such as its patented approach to frame-rail construction. The truck’s front frame-rails are splayed to better manage crash energy in certain types of frontal collisions.Of the six crashworthiness evaluations conducted by the IIHS, three simulate frontal impacts. And the Ram 1500 recorded “good” results in each, the highest possible rating.

Outcomes were the same in the three remaining crashworthiness tests, which inflict damage consistent with a side impact, rear impact and a rollover.

Also unique to the Ram 1500 is its use of an Integrated Radar Camera Module (IRCM) to accommodate Forward Collision Mitigation. The IRCM consolidates radar and camera components behind the vehicle’s rearview mirror, which not only simplifies their interface, but keeps important technology out of harm’s way in the event of minor collisions.

Meanwhile, Forward Collision Mitigation in the Ram 1500 earned a “superior” rating from IIHS. The optional feature boasts sensor-fusion technology, which blends camera capability with radar detection to determine when an impact is imminent.The system initially warns the driver to take action to avoid a collision. If the driver does not act in a timely manner, the system may activate the vehicle’s brakes if collision risk remains.

The Top Safety Pick+ rating is also enabled by adaptive LED projector headlamps that have high-beam assist. The technology was refined in May of this year, earning the highest IIHS rating of “good.”A “good” rating in headlamp testing is the latest IIHS requirement to earn Top Safety Pick+.