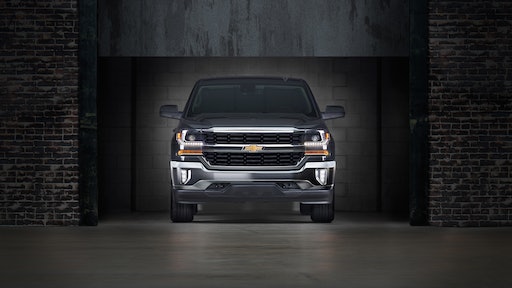 Chevrolet will offer a limited number of 2016 Chevrolet Silverados with eAssist technology. The mild hybrid system improves city fuel economy by 13%, based on EPA estimates.

Chevrolet announced the return of its hybrid full-size pickup truck, with the simplified eAssist mild-hybrid technology available in 2016 Chevrolet Silverado 1500. It’s the Silverado 1500 1LT crew-cab two-wheel-drive half-ton pickup that will get the hydrid option.

The eAssist system with compact lithium-ion battery pack is paired with Silverado’s 5.3L EcoTech V8 engine. The hybrid hardware increases curb weight by approximately 100 lb., and delivers an additional 13 hp and 44 lb.-ft. of torque from the electric motor.

The eAssist propulsion system, including the eight-speed automatic transmission, will be a $500 premium over a comparably equipped two-wheel drive Silverado 1500 crew cab in 1LT trim.

“Silverado already leads the full-size truck segment in V8 fuel economy,” said Sandor Piszar, marketing director for Chevrolet Trucks. “For customers and small-business owners who use their trucks for more urban driving, the addition of eAssist can further reduce their fuel costs without sacrificing the utility they expect in a full-size truck.”

Initially, Chevrolet will offer approximately 500 Silverado eAssist trucks for the 2016 model year, exclusively through California dealers. Based on feedback from initial customers, Chevrolet will adjust production for 2017 model year.

Power for the eAssist system is supplied by a 24-cell, air-cooled 0.45 kWh lithium-ion battery pack located under the center console (or front bench seat) that uses the same battery cells as the Chevrolet Malibu Hybrid. It weighs nearly 15% less than the previous generation eAssist system, yet provides up to 15 kW of power to the electric motor.

A reengineered power inverter module is now liquid cooled and moved under the hood for improved packaging and performance. The software used to control the battery system is based off a modified version of the software for the Chevrolet Volt.

The compact induction motor, located on the accessory drive, provides peak regen capability of 15kW resulting from advanced software controls based off those used in the Volt.