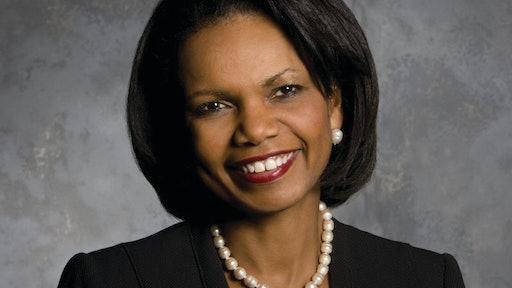 Condoleezza Rice, the 66th Secretary of State of the United States, has been named keynote speaker of The Work Truck Show 2014.

Condoleezza Rice, the 66th Secretary of State of the United States, has been named keynote speaker of The Work Truck Show 2014. Her address is part of the President’s Breakfast & NTEA Annual Meeting on Thursday, March 6.

The Work Truck Show 2014 will be held March 5-7, 2014, at the Indiana Convention Center in Indianapolis, IN. Educational programming, including the Green Truck Summit, begins March 4. The Work Truck Show, North America’s largest work truck event, is produced annually by NTEA, the association for the work truck industry.

Rice’s speech at The Work Truck Show will include insights from both the political arena as well as her educational and managerial career. Rice is a Professor of Political Economy in the Graduate School of Business, the Thomas and Barbara Stephenson Senior Fellow on Public Policy at the Hoover Institution, and a Professor of Political Science at Stanford University. She is a founding partner of the international strategic consulting firm RiceHadleyGates, LLC, and serves on the boards of KiORs a renewable fuels company; C3, an energy software company; and Makena Capital, a private endowment firm.

Rice previously served as Stanford University’s provost from 1993 to 1999, overseeing 1,400 faculty members, 14,000 students and a $1.5 billion annual budget. She has authored and co-authored several books, including the bestselling “No Higher Honor: A Memoir of My Years in Washington” (2011) and “Extraordinary, Ordinary People: A Memoir of Family” (2010).

“Condoleezza Rice has a diverse leadership background that will inspire our NTEA members and other Work Truck Show attendees,” says Mark Woody, NTEA 2014 Convention chairman and president of Palfinger North America, (Niagara Falls, ON, Canada). “She follows in the footsteps of several high-profile leaders who have appeared at the President’s Breakfast and NTEA Annual Meeting, including Presidents George H.W. Bush in 2004 and George W. Bush in 2012.”