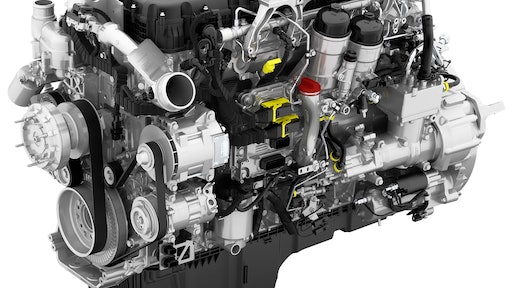 Helping drive fuel efficiency improvements is a number of refinements that all come together to maximize performance. The engines feature optimized combustion with multi-pulse fuel injection. A smaller, more efficient turbocharger boosts power and improves responsiveness.  And an enhanced piston design has added features to reduce frictional losses.  PACCAR’s next generation aftertreatment system completes the system to further reduce particulates and NOx without sacrificing power or fuel economy.

The engines were updated for added reliability. An enhanced fully-encapsulated engine harness protects against the elements, while connections were reduced between the engine and vehicle. Inside the engine, several structural enhancements were added to strengthen components and optimize rigidity.

The engines offer extended service intervals of up to 75,000 miles for both the oil and fuel filter combined with major components warranty, which is 5 years or 500,000 miles.

Chris Villavarayan with Meritor talks about how the company took its on-highway experience to move into the off-highway market, including into electrification.
Meritor Inc.
March 12, 2020

Alliance AutoGas will be unveiling its latest technology in a 2020 F-250 at the 20th Anniversary NTEA Work Truck Show in Indianapolis, IN.
February 27, 2020

Tips to Help Your Battery Survive on the Construction Site

The key to achieving trouble-free service from construction vehicle batteries is to properly spec the correct battery type and to ensure the batteries are always kept in their proper State of Charge (SOC).
EnerSys
September 23, 2019

The Walker family sought a buyer for the business, allowing Allison to purchase the assets of the company that supplies essential components for its core on-highway transmission products
Allison Transmission
September 9, 2019

Four global plants have received a 2018 10 PPM Quality Award from PACCAR recognizing suppliers that meet or exceed its rigorous standard of 10 or fewer defective parts for every 1 million parts shipped to the OEM.
Meritor Inc.
July 22, 2019

The growing parts portfolio, increasing retail footprint, and ability to deliver parts in 24 hours or less is intended to benefit customer uptime
July 22, 2019