Aggregate Industries’ Northeast Region places 25,952 tons of warm mix asphalt on Runway 4R/22L at Boston Logan International Airport, the first airport in the nation to use the environmentally friendly asphalt on a runway repaving project, according to the Massachusetts Port Authority 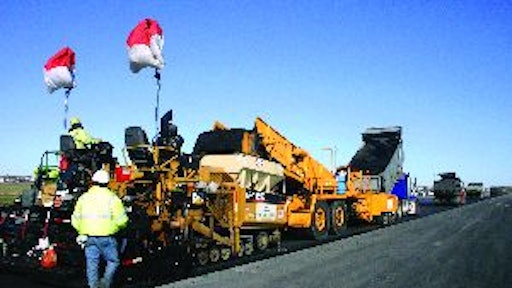 When the Massachusetts Port Authority (Massport) awarded a $6.3-million contract this past summer to repave Runway 4R/22L at Boston Logan International Airport, the priority was to clearly reduce greenhouse emissions and energy during construction.

For the project’s general contractor, McCourt Construction, and its paving subcontractor, Aggregate Industries’ Northeast Region, that mission was accomplished this fall.

With a warm mix design, that is produced at approximately 50 to 75 degrees F lower than hot mix, Massport projected a significant reduction in carbon dioxide and heating fuel, and achieved energy savings and Btus. Along with the lower production temperature benefits, the project was projected to generate additional savings by incorporating 18-percent reclaimed asphalt pavement (RAP) back into the warm mix.

In a statement released earlier, Massport CEO and Executive Director Tomas J. Kinton Jr. said, “Warm mix uses 20 percent less energy to make, produces 20 percent fewer greenhouse emissions when applied, and allows us to use a higher percentage of recycled asphalt pavement in the final product. This project is another example of Massport leading the way as an airport operator to reduce our impact on the environment wherever we can do so in a financially responsible way.”

Since runway paving projects in the United States must meet stringent Federal Aviation Administration standards, Massport tested warm mix at Logan on a taxiway and apron areas last year with the technical support provided by Stantec, one of Massport’s consultants.

The contract called for milling and filling the outer 37.5 feet of each side of the 10,005-foot-long runway. The center 75-foot-wide portion of Runway 4R/22L had been repaved in 2006. Success of the project will ultimately determine whether or not warm mix will be used for all future paving projects at Logan.

On the 4R/22L project, Aggregate’s crews milled off the top 8 inches of the outer runway surface, and then replaced it with an FAA P-401 mix design. The warm mix design contained 18-percent RAP, along with a lime additive to prevent stripping and a latex additive which helps prevent rutting of the mix. All of the mix was produced at Aggregate’s Saugus plant, located eight miles from Logan. The mix was placed in two lifts — a 5 1/2-inch course and 2 1/2-inch course of P-401 3/4” Max Lime Latex RAP Warm Mix. Both mix designs utilized a high percentage of ½-inch aggregate.

Aggregate blended the Sasobit with a PG 64-28 liquid AC binder at its Everett AC terminal and then transported the mixture to the Saugus plant. The company installed a custom-designed blender at the Everett facility a year and half ago for purpose of mixing all warm mix binders just prior to delivery at any plant. It’s more cost-effective than customizing each plant to accommodate the production of warm mixes.

At the Saugus facility, a lime silo was added to meet the specs of the Logan project mix design.

“We found that Sasobit is really the best warm mix additive, and that proved to be the case on the Logan project,” says Mark Nikitas, Aggregate Industries’ Northeast Region marketing manager. “With the high level of RAP and the latex additive used in the mix, the Sasobit significantly improved the workability of the mix.”

The mix would usually leave the plant at 270 to 280 degrees F and would only drop to about 260 degrees F directly behind the paver screed.

“We didn’t use a material transfer vehicle the first day and realized the paver was idle for about 90 seconds between each truck, and when you’re placing a 5 1/2-inch lift it doesn’t take long to run through a truckload,” notes Dennis Horan, project superintendent. “So we brought out an MTV and that helped to increase our daily production rate.”

Paving the 37.5-foot-wide areas in three pulls, the paving crew would place 2,200 feet before backing up to lay the adjacent lift.

“With the MTV we managed to put down approximately 580 tons per hour,” says Horan. “We used four vibratory rollers (IR DD-130) and changed our rolling pattern (rolling) from cold to hot, to (rolling) from hot to cold in order to achieve better joint densities. We were able to achieve density a lot quicker with the warm mix, with the exception of the longitudinal joints, which required a little more work.”

According to Horan, the Logan warm mix project was a “basic job” with few challenges other than weather related issues.

“We had some taxiway issues when the wind shifted and the airport had to shift over to a different runway that crossed the one we were working on,” he notes. “When that happened we had to shut down our operation. “We adjusted to that situation by working both nights and days, and in some cases 16-hour days to complete the project on schedule.”

While the Logan project was not Aggregate’s first major warm mix job, it provided significant validation that a high-RAP, warm mix design not only performs as well as hot mix, but also saves energy, materials and provides customers like Massport with an environmentally-friendly solution to its paving needs.

“We produced 55,000 tons of warm mix this year for the Rte. 93 project through Boston, and we’ve produced and placed a substantial amount of warm mix for commercial customers as well as municipalities,” Nikitas says. “We’re able to produce quality warm mix with or without latex and with high or low amounts of RAP. Using Sasobit helps improve the viscosity of the mix, which allows us to achieve better compaction at a lower temperature.”

For the Logan project, it was simply a matter of providing a warm mix that could meet the stringent FAA specification requirements used on hot mix.

“The requirements are performance-based percent within limits that define air voids, stability, compaction and grade standards that need to be achieved,” says Mike Nichols, Asphalt Quality Control manager for Aggregate Industries’ Northeast Region. “Performance-based specifications on this job allows the contractor to offset any penalties with bonuses achieved in meeting the outlined requirements monitored by quality control and the Massport consultants. As a result, it is possible to achieve 100 percent payment allowed by the FAA specification.”

For Massport, proving that warm mix can provide a quality pavement that withstands the rigors of heavy planes was important in charting future repaving projects at Logan.

But more importantly, the project provided another way for Massport to continue its environmental stewardship commitment to reduce emissions and recycle valuable resources.

As Kinton noted earlier when announcing the Logan project, “We have a lot to be proud of, but we have much more work to do. We must do what we can to limit the environmental impacts of the aviation and maritime industries.”

You can be sure that warm mix asphalt projects designed with high RAP will be part of the solution.