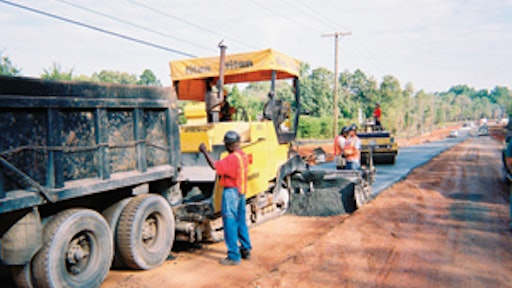 The road leading to a high-end residential development southwest of Charlotte, NC didn't reflect the entrance you would expect for half-million dollar lots and multi-million dollar homes, and the developers wanted that corrected before opening their doors to potential buyers this past spring.

The existing 18-foot-wide asphalt road was in dire need of reconstruction due to the asphalt, base and subgrade failures caused by heavy traffic use. Full-depth repair was required on over 40 percent of the project and widening or turn lanes were required to meet the traffic demands of several new subdivisions. Rea and Site-Prep were under a tight completion deadline in order to meet the DOT and developers objectives.

The developer, Crescent Resources — a subsidiary of Duke Power — and the contractors partnered with the DOT to offer an alternative to the patching required to repair the road, which would be costly, require considerable time to complete, and the final project would not guarantee a warranty performance.

"Crescent paid for the improvements, but we still needed to meet DOT requirements on how to construct the road," recalls John Edwards, III, vice president for Site-Prep. "The DOT originally wanted to saw-cut the full-depth patches, but so much of the road required that extensive reconstruction and the developer wanted the work done in time for the open house in spring. With only 150 to 160 days to complete the work, we realized we had to come up with a different way to deal with the existing road failures, as well as widen the road at the same time."

As a solution, the developer and contractors proposed Full Depth Reclamation (FDR) of the existing road along with a cement base-treated widening of an additional turn lane. This solution included re-profiling the existing roadway in order to address changes in the typical section and improve site distance problems that existed with the proposed new interchanges.

Improvements to Shopton Road included widening the road with an additional 15-foot-wide lane and 1-foot-wide shoulder. The new lane was constructed using an 8-inch cement-treated aggregate base (CTB), designed to eliminate the possibility of differential settlement.

The project was split into four phases because alternative detour routes were available and closing the road allowed for speedier completion and less distress to motorists using the road. During the closure of each of the four phases, Morgan Corp., the general contractor who performed the grading work, widened the existing 18-foot-wide road to 34 feet, and re-graded the slopes and adjacent ditches. With the grading work completed, Site-Prep was able to complete its FDR work of the existing asphalt roadway. Site-Prep went a full 10 inches deep with its FDR work, adding 40 pounds of Portland cement per square yard to stabilize the new base. To insure a consistent base material throughout the new road, a cement-treated aggregate base 8 inches thick, using a 2-percent Portland cement additive, was used in the 16-foot-wide additional lane. Following the FDR and cement-treated aggregate work, Rea applied four inches of HMA — 4,600 tons of 2.5-inch binder and 2,700 tons of 1.5-inch surface courses — over the FDR and cement-treated bases.

"The cement-treated aggregate base for the widened section of the road worked best, because it provided the same structural base as the FDR section, and the DOT wanted a consistent base underneath the new HMA overlay," Edwards says.

Executing the project within a tight timeframe also proved critical to completion and the overall quality of the final road surface.

"By closing the road off in four phases, we were able to accelerate the new construction and the reclamation work, cutting the overall construction time by 50 percent," Edwards says. "The developer wanted to meet all DOT standards in reconstructing the road, but he also wanted the road finished in time for the spring opening. As a result of using FDR on the existing asphalt roadway rather than patching distressed segments of pavement and closing the road to traffic during construction, we were able to complete the project in 75 days rather than the 150 original construction days specified in the contract."

During the phase construction, Site-Prep's FDR crew was able to complete work within three to four days, and Rea's paving crews placed a new binder course within one to two days.

"The FDR approach was an easy sell to the developer, because it involved recycling existing asphalt, and The Sanctuary is a 'green' development," Edwards says. "The DOT also liked the FDR approach because it produced a consistent base for a new overlay and patching distressed sections would not have done that."

The cost of reclamation and a new HMA overlay produced a 21 percent savings over the original proposal to patch and overlay.

"The entire project cost 40 percent less than a conventional reconstruction, and I think the DOT and developer are happy with that," Edwards says. "Morgan, Rea and Site-Prep partnered with the owner and DOT to provide a lower cost, higher quality project with a lesser impact to existing traffic flows by recommending the FDR solution over conventional patch and resurfacing construction."

Site-Prep Inc. of NC, founded in 1991, performs construction services as a subcontractor for highway construction firms in the Carolina, Virginia, Georgia and Tennessee. Site-Prep works primarily as a soil and base stabilization, and asphalt reclamation contractor, but also does extensive work in the field of stone base and roller compacted concrete work.

Where there is construction growth, there will be significant difficulties in meeting the demand for workers. Here is a look at what's ahead in 2021.
Patrick Jones
March 1, 2021
Latest