Out with the Old - Replacing Two Asphalt Plants With One 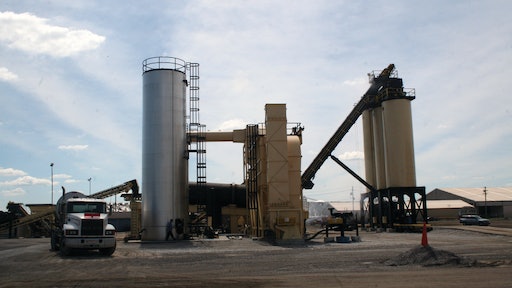 The plant chosen for the Grand River site was a dual-drum MileMaker 350 with three 200-ton silos, a pair of vertically mounted AC tanks and a 60,000-cfm baghouse.

Grand River Asphalt, a Cleveland-area company, recently replaced not one but two smaller asphalt plants which, while still operational, were bringing them a potent one-two punch of increased downtime and rising maintenance costs. Looking to keep production levels up while, at the same time, streamlining the overall operation, the company recently took delivery of a 350-tph plant from Asphalt Drum Mixers (ADM) and has more than easily bypassed the output of the drum plant and batch plant it replaced.

Located in Grand River, OH, about 30 miles northeast of Cleveland, Grand River Asphalt is a part of the Ohio-based Osborne Companies, a consortium which supplies the construction industry in a seven county area with ready-mix concrete, asphalt, aggregates, and masonry building materials. According to Gary Bradler, Grand River's president, its parent company is unique in a number of respects, not the least of which is the commitment of its owner.

"This is a sizeable company consisting of a dozen aggregate yards, four material yards, a lime plant, a trucking company, 13 concrete batch plants and a pair of asphalt plants," he says. "Heading it all up is Jerome Osborne Sr., who started it with a single truck in 1947 and today, at age 89 is still actively involved in the day-to-day operations of every company."

In addition to all the sites mentioned above, Bradler says that Osborne Companies has a number of other non-construction endeavors that round things out nicely.

Bradler says a pair of asphalt plants which were in place at the Grand River location for nearly 40 years were starting to impact production and the bottom line.

"There comes a time when you realize that, if you are spending a good deal of money just to keep a piece of machinery running, it's time to retire it," he says. "That was the case with both our 240-tph drum plant and 120-tph batch plant."

Research into the appropriate replacement was thorough and consisted of online searching, visits to asphalt plants throughout the region and a conversation with the owners of Small Sand & Gravel in Gambier, Ohio, which was particularly telling.

"All of these processors spoke highly of the ADM plants they had at their facilities, which really got us leaning in that direction. A trip to the ADM facility just outside Ft. Wayne, Ind., essentially sealed the deal for us. Seeing the way the plants were constructed, the choice of materials used, the craftsmanship that goes into every component, told us this was a system that would perform and - just as importantly - it was one that would last."

The plant chosen for the Grand River site was a dual-drum MileMaker 350 with three 200-ton silos, a pair of vertically mounted AC tanks, five cold-feed bins and a 60,000-cfm baghouse. According to Bradler, caisson and foundation work for the new plant was started in mid-January. Foundations were completed in mid-March, plant components started comin in by the end of March, and the overall assembly took about two weeks. The plant was online by mid-May.

Partly because of its design, partly because the AC tanks were mounted in an upright fashion, the new plant actually sits on a much smaller footprint (roughly 200 by 200 feet) than the two plants it replaced. The 350-tph MileMaker features ADM's dual-drum counterflow design which utilizes separate drying and mixing zones to achieve the maximum level of heat transfer and fuel efficiency. In this configuration, aggregate and super-heated air move in opposite directions, allowing aggregate to be dried and heated in one drum while asphalt is later mixed in the second drum.

"The new MileMaker is quiet and runs extremely clean - there is literally nothing coming off the stacks. We are in an area that's remote enough where some smoke is not really an issue, but it's nice to know that we are doing our part to improve air quality in the area."

Grand River ordered its MileMaker with a design that allows for RAP production when needed. Bradler says the plant is flexible enough to allow for easy changes between mix designs, but adds that such is rarely the case.

"Our core mixes are generally a base mix, an intermediate mix and a top," he says. "Mind you, each one of those could contain RAP depending on what is spec'd for that particular job."

Grand River is currently entering the last months of its first full year with the MileMaker, and Bradler says they could not be happier with the way things have gone.

"We had a couple of small issues when we first went online, but that's to be expected with any new equipment, let alone something as big as this. But those minor hiccups were quickly resolved by ADM, and we were back in no time. They also did a nice job training our people so startup would be smooth; I can't say enough about the role they played."

"We are fortunate to have a good location, a decent, reliable client base in this area and an outstanding person at the helm in Mr. Osborne," says Bradler. "Couple all that with the productivity we've seen we can get can get out of the new ADM plant and we feel confident that we are very well-situated for the long-term."