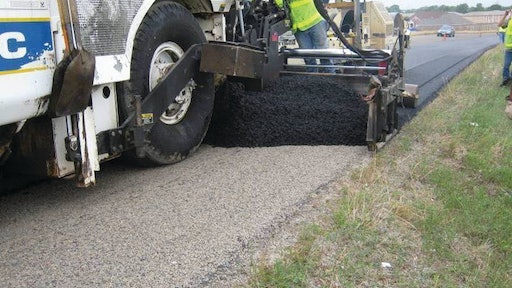 Results from the trial showed that, when added in small quantities of 1-3%, the Titan additive significantly reduced the energy, maintenance, and transportation costs normally associated with paving.

State transportation departments across America are always looking for ways to save on the short and long-term costs associated with paving, and the Texas Department of Transportation is no exception. In the spring of 2010, the department partnered with Honeywell to test the effectiveness of its new Titan asphalt additive on a 1.2 lane-mile stretch of state highway in Beaumont, TX. Results from the trial showed that, when added in small quantities of 1-3%, the Titan additive significantly reduced the energy, maintenance, and transportation costs normally associated with paving, achieving significant environmental and economic benefits over similar formulations currently used by the paving industry.

On the day of the trial, the paving company used an asphalt blend from Martin Asphalt that was modified with a 1:1 mix of Titan and SBS, with the modifier mix representing about 6% of the overall asphalt formulation.

SBS (or Styrene Butadiene Styrene) is another additive conventionally used as an asphalt modifier. "In some cases, the Titan additive can be used in place of SBS, and in some cases, Honeywell Titan is used in combination with SBS to achieve additional benefits," says Steve Wood with Honeywell. "The type/combination of the additive used depends on the road specifications that need to be met."

When compared with asphalt modified with conventional asphalt polymers, such as pure SBS, Honeywell asphalt polymers reduced the processing temperature of the asphalt by 60 to 75º F below the more than 300º F normally required for mixing and applying the road surface, reducing energy consumption, says Wood. The asphalt also compacted more easily than asphalt modified by pure SBS, allowing for a reduced number of roller passes to pave the road surface, saving time and fuel costs.**

The reduced processing temperature of the Honeywell-modified asphalt during the trial produced the added benefit of cutting the amount of volatile organic compounds (VOCs) and hazardous pollutants released into the air, including the sulfur and nitrogen oxides produced from the energy used to mix the asphalt. By lowering emissions, the Titan additive reduces the impact of paving on the environment and helped improve the safety of the paving crew.

Data from the paving trial, when applied to an industry model*, suggests that Honeywell Titan reduced:

The Texas Department of Transportation reported that the material met all of their specifications, and the road crews commented on the improved workability of the asphalt, which allowed them to shovel and rake the asphalt with greater ease. Equipment operators noted that the asphalt compacted more easily, and that they were able to reduce the number of roller passes to two from the three passes usually required with conventional polymer-modified asphalt. A reduction in roller passes contributes to smoother pavement, which helps vehicles pass along the road more efficiently.

Titan additives for asphalt are also designed to help reduce rutting in pavement while having a minimal effect on cold and intermediate temperature performance, such as cracking, helping create a more durable pavement.

The Benefits of Titan Additives

When compared with SBS, Honeywell Titan can:

Honeywell Chairman and CEO Selected "CEO of the Year"