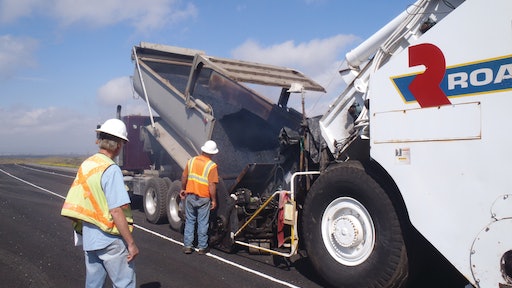 Not everything in paradise is perfect, and Saddle Road on Hawaii’s Big Island was in need of some TLC. The vital route that connects the east side of the island to the west side, was originally built in 1942 to provide access to its military training facilities located in the “saddle” between Mauna Loa and Mauna Kea. Over the next 50 years, some widening and paving was done, but no significant improvements were made, leaving many of the existing roadway deficiencies uncorrected.

Since 2004, the Hawaii Department of Transportation (HIDOT) has been working in phases to reconstruct different sections of the 48-mile-long road that serves as a primary route and is one of only three major routes to connect the Big Island's major population centers. The latest section being worked on is on the west side of the island, a new alignment between existing Saddle Road milepost 41.5 and State Route 190, Mamalahoa Highway.

“Reconstructing the remainder of Saddle Road will provide a safe and efficient route to access areas along Saddle Road and for cross-island traffic between the east and west,” says Glenn M. Okimoto, Hawaii Department of Transportation Director. “It will eliminate its deficiencies, minimize conflicts with military operations, increase capacity, improve safety, meet public and social demands and enhance economic development.”

The project, which is nearing completion and in the process of being paved, required substantial rehabilitation to keep up with federal highway standards and improve safety. Horizontal and vertical alignments in the road were redesigned and implemented to meet current rural arterial design standards. HIDOT also installed solar-powered emergency call boxes to provide piece of mind and an instant connection with 911 in case of an emergency. Uphill passing lanes, truck escape ramps and a military vehicle underpass were also incorporated to the new road design. “The underpass will connect the Pohakuloa Military Training Area with the Keamuku Maneuver Area, thus avoiding an at-grade crossing on Saddle Road,” says Okimoto.

Finishing ahead of schedule and under budget

HIDOT partnered with the Federal Highway Administration (FHWA) for the Saddle Road West Side project. HIDOT completed a 1.2 million cubic yard grading of the roadway six full months ahead of schedule and within the $33.7 million budget. This was largely due to the close partnership between HDOT and FHWA's Central Lands Highway Division.

The FHWA, Central Federal Lands Highway Division, was requested by the HIDOT through agreement to provide Project Management, NEPA, design, and construction oversight services to supplement HIDOT forces for the Saddle Road route project. “CFLHD has historically shown strong success with managing projects that have the potential to be contentious, involving multiple federal, state and local government entities, with strong public involvement,” Okimoto says. “The partnership established between the FHWA-CFLHD, the FHWA Hawaii Division Office and the Hawaii Department of Transportation has historically been strong and the success of the Saddle Road project reinforces the decision to maintain that partnership.”

Management of the project budget was completed through continual review and communication between the CFLHD project manager (Mike Will), the on-site construction engineer (Mark Lloyd), and the contractor (Baxter Kirkland - Kirkland Construction). Monitoring of the schedule and budget occurred monthly as contractor invoices were processed. This helped to identify any potential for schedule delay or quantity over-run. Additionally, weekly meetings were held between Kirkland and Lloyd to assess project status and upcoming activities.

“Kirkland construction brought a plan to complete the work efficiently and as a result, were able to shave six months from the planned schedule,” says Okimoto. “The plan included shipping equipment from the mainland that is not readily available on-island that would traditionally be used for larger scale mining types of operations like the 9 cubic yard excavators. The use of this large scale construction equipment was proven beneficial to the project schedule.”

Since the U.S. Army originally built the road for emergency access during World War II to quickly deploy military vehicles and personnel in case of an attack, an assessment of the area needed to be done before construction could begin.

“The new alignment crosses the Keamuku Training Area, an area that was part of the former Waikoloa Manuever Area,” says Okimoto. This area was used by the military between 1943 and 1946 to conduct training exercises in preparation for battle in the Pacific arena during World War II. “An assessment of the hazards posed by remnant ordnance from these activities was necessary,” Okimoto adds. “The Army Corps of Engineers provided Unexploded Ordinance Support. They monitored and performed inspections in advance for the construction areas where the contractor would be working to identify these hazards.”

HIDOT has begun construction on the final phase of the project, which includes paving and placing the final touches on the roadway. Goodfellow Brothers and Grace Pacific were able to wrap up the paving portion of this project (10.27 miles) in nine months, which is unheard of in Hawaii.

"The challenge here was this was a stand alone job where the plant could only produce mix for Saddle Road," says Steve Obrey from Grace Pacific. "We were also challenged with moving and unloading 60+ 20-ton transit tanks of asphalt to keep up with the aggressive schedule. Scheduling of transport trucks and Young Brothers was the limiting factor."

"We decided to double up all our equipment in case of break downs and no loss time," says Obrey. "We overcame these challenges with good people,  help from the FHWA and Goodfellow Brothers, the prime contractor for this project."

“Superpave was chosen for volumetric properties and in anticipation of Option award to place 2 inches of the final top mat,” says Okimoto. The entire Saddle Road west side project is scheduled to cost $64.5 million and has received $13.5 million in federal Transportation Income Generating Economic Recovery (TIGER) grant funding.

On September 7, 2013, HIDOT will be officially renaming the highway in honor of the late Senator Daniel K. Inouye who was instrumental in obtaining funding for this project and seeing that work continued to progress. The section from MP 11 to Mamaloahoa Highway will be named the Daniel K. Inouye Highway. This portion of the project was completed in August 2013.