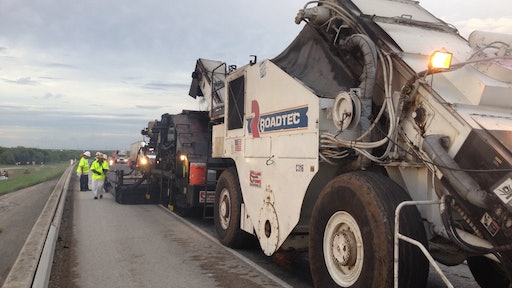 The project called for milling a 15-mile stretch of U.S. Highway 281 to a 2-in. depth, then placing 2 in. of new asphalt, all within a two-month period.

Smack dab in the middle of central Texas lies Blanco County, which is in the state’s Hill Country. With it’s picturesque rugged hills with granite and limestone outcroppings, the county is west of Austin and north of San Antonio. The county is traversed by two significant rivers, the Blanco River and the Pedernales River, and two major highways, U.S. Highway 290 and U.S. Highway 281.

There is a 15-mile stretch of U.S. Highway 281 that the Texas Department of Transportation (TxDOT) identified for significant maintenance. The target stretch of U.S. 281 connects Marble Falls and Johnson City with approximately 9,000 vehicles traveling this part of road daily. It also serves as a north-south connection between San Antonio and Lampasas.

The project section of highway had last received a seal coat surface treatment in 2002. There was a substantial amount of cracking in the existing pavement surface. TxDOT determined that it was time to perform preventative maintenance on U.S. 281 before moisture could get into the base material and cause even further damage, thereby requiring more extensive rehabilitation work.

Clark Construction, based in San Antonio, TX won the bid for repairing and resurfacing the highway section in Blanco County. This is an approximately $4.7 million project for the company.

“When we first arrived on the site, we ran a profilograph to measure the pavement surface roughness,” states David F. Clark, vice president of Clark Construction. “The profile index was in the 80s and 90s which confirmed the road was in bad shape and needed complete resurfacing.”

The timetable for completing the project was tight. The company had two months to mill and resurface the road with hot mix asphalt. They dedicated 25 employees to the project. Rain delayed the project early on, which created extra pressure to be efficient.

“We only needed to mill the highway to a two-inch depth so our milling machines had more than enough capacity to easily mill the existing asphalt to the required maintenance depth,” Corey S. Clark, director of asphalt and fleet operations for Clark Construction, said. “Our local source, Vulcan Materials, recycled the milled material into the asphalt used to repave the roadway.”

The company used two power brooms and a vacuum truck to thoroughly clean the milled surface before paving began.

To ensure that Clark Construction could efficiently place the two-inches of new asphalt and meet the TxDOT smoothness and rideability specs the company used its Roadtec SP-200 spray paver. The ride specs were to meet TxDOT surface test type B schedule 3 for smoothness of ride.  Additionally, the contractor had to meet density requirements for the material placed.

“The Roadtec SP-200 spray paver has an innovative design that’s been extremely helpful to us,” says Corey Clark. “On previous jobs we have experienced a significant amount of savings in time, number of employees required, and materials cost.”

Clark Construction had owned the first SP-200 spray paver ever manufactured and recently traded it in for a new machine after putting over 10,000 hours on it.

Differing from a conventional paver, the machine sprays a tack coat seconds before laying the asphalt mix. The tack coat is designed to ensure a good bond to the existing pavement. A 500,000-btu heater heats the liquid tack in the paver’s 2,100-gallon tank before the paving operation begins.

The liquid oil continuously circulates through the system, and an onboard microprocessor controls the rate of flow to the spray bar. The spray bars extend as needed with the screed and each nozzle can be manually shut off for partial passes.

The Roadtec SP-200 features a gravity-fed asphalt mix hopper, which has a capacity of 11 tons. The 14- by ¾-inch spreading augers deliver the mix to the Eagle 10 hydraulically extendable, vibrating screed.

“This is our second SP-200 paver we’ve owned since 2004,” Corey Clark said, “The big benefit for us is the machine provides superior bonding to the existing  pavement. The TxDOT inspectors were impressed to see that within seconds of the oil spray that the asphalt was placed.”

Once the 15-mile stretch of U.S. Highway 281 was completed, Clark Construction ran another profilograph to measure the pavement surface. The second profilograph confirmed they had achieved the results they intended—a measurement of 30.

“I’m happy with the finished results on our Highway 281 project,” concluded Corey Clark. “We achieved a great ride, good quality, and the finished road looks great…and we expect it to last 10-plus years.”