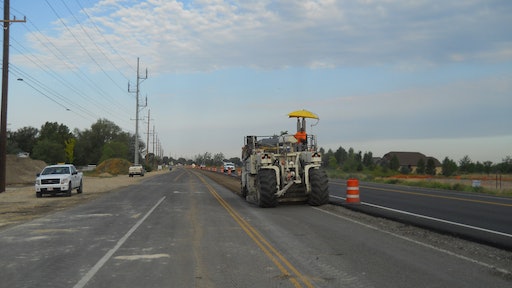 You’ve been there. A big job that includes reconstruction, widening, and paving, with a tight deadline and lane closure restrictions. What do you do to make sure all the pieces are in place and the job gets done on time? The Idaho DOT decided to use Idaho 44 as a pilot project for their new design build initiative for highway construction in hopes of removing unknown variables from the project before it even began.

Eagle, ID, the location of the project, has been experiencing a big boom in residential construction. Every day 19,000 motorists drive through the Idaho 44/Linder Road intersection. Traffic in this area is expected to increase to 30,000 cars each day by 2030 and the Idaho DOT needed to improve the road to accommodate the anticipated future increase in traffic.

“The objective of the project was to totally rebuild three intersections and widen two lanes of road to five lanes with a turn lane,” says Pat McEntee, vice president at Central Paving Co., Inc. “We could not impede traffic so we had to find a way to widen off to the side and leave traffic in the existing lanes.”

Central Paving, Inc. teamed up with Horrocks Engineering in August of 2012 to begin the design build process, which proved to be quite beneficial on this 8,000 ft. road re-build.

Being the first design build project in the state, central paving was the first contractor to use this delivery method.

“One of the major benefits of a design build is the advanced opportunities it creates for the contractor,” McEntee says. “It allowed us to have direct correlation through the design with the utilities in advance. We were able to coordinate with the utility companies early to move anything outside of the project that we needed.”

On our end, normally in a bid process you don’t have the opportunity to talk to the utilities in advance to figure out what’s out there, what needs to be moved, and what could cause impacts to your construction. We were able to sit down with the utilities, open up the conversation with the agencies and get a plan put together in scheduling the utilities in and out to facilitate the construction process.”

The entire project was modeled and set up to run off of the Trimble 3D grade system. Excavating work started in August of 2012.

Even though the design build process helped with communication, Central Paving still encountered their share of challenges, one in the form of a 700-ft long gravity retaining wall.

“We had to construct a retaining wall to support the turn lane,” McEntee says. “The original plan called for a large box culvert since the ditch the wall was to be constructed in flows water year round and serves as an irrigation ditch in the summer.”

Central Paving realized that something else would be needed in order to keep the flow of the water moving and an irrigation canal was installed instead.

“There was a 12-inch water line that ran parallel to the wall we were trying to build. We worked with United Water, the local provider, to get them to shut down that water line. They were actually able to re-route that water while we did the excavation and construction. That’s another great example of how design build helped with coordination early on.

The design build process enabled us to work closely with the transportation department, and the engineers, to get answers before they became a problem. By having all the decision makers at the table enabled our team to head off any potential delays early in the process."

Excavating out materials can be both time consuming and expensive, which is why Horrocks chose to go with CRABs (Cement Recycled Asphalt Base Stabilization) on this project.

“Horrocks chose this method due to the simplicity and speed of the procedure,” says McEntee. “We were able to utilize some of the existing bases that were already under the roadway by increasing that tensile strength and adding in cement.”

Recycling with cement makes the reconstruction of old roads a largely self-sustaining process. Stabilizing the old asphalt surface, granular base and underlying subgrade soil with cement creates a strong foundation for the pavement. Usually, there is little need for material to be removed or added. The old, brittle asphalt, when pulverized, becomes “black gravel” that will bond to hydrated cement readily.

TEREX Road Reclaimers were brought in on this project to initiate the CRABs process. The whole side of the existing roadway was pulverized to be used for base under the roadway. The pulverized material is shaped to the desired cross-section and grade, and then cement is spread in a measured amount on the surface of the shaped roadway, in either dry or slurry form. The aggregate-soil-cement-water mixture is then combined and blended with the pulverizing/mixing machinery.

McEntee simplifies the process even further. “You pulverize it, model it and bring in blades to re-shape that roadway to the new centerline profile,” he says. “Then you add cement to that base, reclaim it again, re-shape it and then pave it.”

In case the existing asphalt pavement does not meet the aggregate requirements for a good stabilized base, additional aggregates can be readily incorporated into the recycled aggregate during construction, which is what happened on this project.

“We were short of making the materials needed after pulverization so we brought in 50% virgin ¾ gravel to accompany the other 50% of the recycled base materials,” says McEntee.

Once the cement recycled asphalt base was cured, the road was ready for an asphalt overlay. 30,000 tons of warm mix (Superpave SP-4) was laid in two lifts. Central Paving was able to incorporate 30% RAP (recycled asphalt pavement) in the mix. Mix was laid with Caterpillar AP1055E Pavers and compacted with Hamm oscillatory rollers.

Mix was designed off the easel counts for that section of roadway.

Throughout the entire project, Central Paving was required to keep three lanes of traffic open at all times, which required them to work mostly at night.

The project, which was completed in October of 2013, won an engineering excellence award from the American Council of Engineering Company of Idaho.

“Overall this design build project worked out really well,” says McEntee. “We worked for months with Horrocks to better understand the design build learning process. We had to come up with a design method that would allow three lanes of traffic open, meet the requirements of the transportation department and still exceed their timeframes of having the project completed within deadlines and budget.”

The Door Is Wide Open For Design Build