The Rise of the Asphalt Interlayer 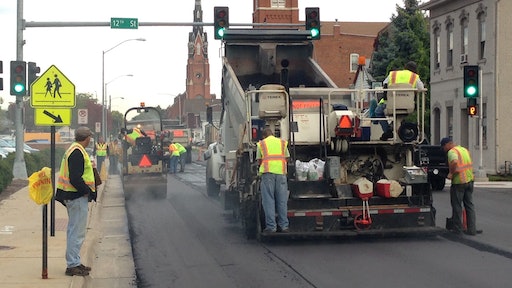 Three years ago, the City of Dubuque Engineering and River City Paving (RCP) ventured forth to try a new construction method on busy Central Ave., an arterial street in downtown Dubuque, IA.

Faced with huge costs to reconstruct hundreds of bad Portland Concrete Cement (PCC) joints, the two entities decided that the rehabilitation of Central Ave. should use an asphalt interlayer to reduce the reflective cracking of an asphalt overlay over an aging PCC roadway.

The project and the process were both a success. It worked so well that Dubuque Civil Engineer, Jon Dienst, decided to use the same construction method on Central Ave.’s one-way counterpart, White Street.

“We saw a significant decrease in both the number and severity of reflective cracks compared to our traditional asphalt overlays,” said Dienst.

Asphalt as an interlayer

The initial plan on Central Ave. was to do full-depth concrete patches on the 60-year-old concrete roadway, says Dienst. “We knew we’d have to do a substantial amount of patching,” he says.

River City Paving, a division of Mathy Construction Co. and headquartered in Kieler, WI, put forth the idea of doing a 1-inch asphalt interlayer.

An asphalt interlayer is a fine-graded, high-asphalt content, polymerized hot mix asphalt (HMA). It’s placed in a nominal 1-inch thickness over a jointed PCC pavement and then overlaid with a minimum of three inches of traditional HMA. It’s placed in the same manner as traditional HMA except that the mix is only static (non-vibratory) rolled.

“This particular mix design used a PG 64-34 asphalt cement with an optimal asphalt cement content of 8.6%,” explains a project manager with Mathy Construction Co. “We developed a mix for this rehabilitation technique almost a decade ago with tremendous results each time it has been utilized. It is great to see more cities, counties and the Iowa DOT taking advantage of longer pavement performance using the asphalt interlayer.”

Dienst says the cost of the interlayer mix were not much different than a standard asphalt mix. “There were a few dollars per ton difference in the mix, but certainly not a deal breaker,” he says. “And we saved money because we weren’t patching.”

“When we originally designed Central Ave., it was a straight mill-and-fill operation,” says Dienst. “After the initial milling, we were looking at a tremendous amount of PCC joint patching. Instead of doing the time-consuming and more expensive joint patching, we opted to ‘plunge’ mill the joints.

“We placed the mill head over the joint, ground down until we hit something solid, then filled these joints with HMA,” he explains. “We then utilized the 1-inch asphalt interlayer to impede the reflective cracking of the 3-inch asphalt overlay.”

After the initial success of the Central Ave project three years prior, Dienst was anxious to repeat the success on White Street, Central Ave.’s one way parallel.

“We were reactive on Central Ave., proactive on White Street,” he says.

The City of Dubuque, River City Paving and the Asphalt Paving Association of Iowa hosted an open house on the White St. project in September to highlight the effectiveness of the asphalt interlayer as a PCC road rehabilitation technique.

Over 30 city, county and IDOT personnel came to see how this process is done.

“It’s simple to construct,” says Kevin Kueter, senior estimator/project manager at River City Paving. “And in that simplicity is the key to the success. We use the extreme flexibility of the asphalt interlayer to retard the PCC reflective cracks and the traditional asphalt overlay is our wearing course. With proper maintenance, this overlay will last an additional five years or more because of the asphalt interlayer.”

IDOT has developed a developmental specification (DS-12054) and done an experimental project using the asphalt interlayer on a one-mile section on I-35 north of the Mason City, IA. It’s performing exceptionally well. In its third summer, the control section with just an asphalt overlay was surveyed with 65 reflective cracks, while the asphalt interlayer section with an overlay only showed 11 cracks. That’s an 83% performance improvement over the control section.

“Because the interlayer has delayed reflective cracking, we have been able to postpone routine maintenance (crack routing and sealing) on this section of I-35. We can use our limited maintenance funds on other needs. Based on its performance, we are planning to use an interlayer on two additional projects to be let in the near future.” says Mark Callahan, Iowa DOT District 2 Design Engineer.

IDOT Bituminous Engineer Scott Schram took it a step further. “Having already been through the ‘wait-and-see’ period, the use of the interlayer is gaining momentum with our designers. This is a much needed tool for increasing our return on investment compared to traditional overlay practice.”

Bill Rosner with the Asphalt Paving Association of Iowa (APAI) agrees, adding the value of 1 inch of asphalt more than pays for itself. “States and municipalities are all struggling with funding,” he explains. “An asphalt interlayer in this situation helps make more out of less.”

Additional iformation provided by the Asphalt Paving Association of Iowa (APAI). For more details contact APAI at 515-233-0015 or at apai@apai.net.