Pavements that do more than just sit there are already a reality, but are they realistic? 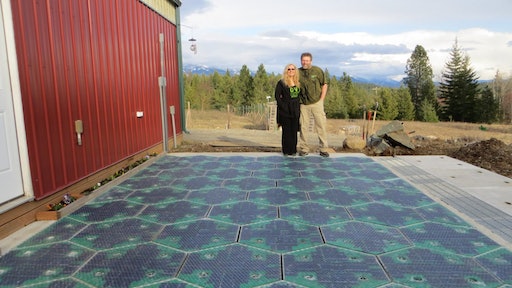 With secure funding for our roadways constantly in question, it’s no wonder scientists and designers have been inventing new types of pavement that they believe will be the future. By now, you’ve probably seen the YouTube video about solar roadways, and with over 18 million views, we can see why.

Scott and Julie Brusaw, both engineers, started to develop their solar roadway technology in 2006. These type of roads could replace any pavement with smart, micro-processing and interlocking solar panels that would generate electricity, while providing a sustainable driving surface.

For those of you in the north, the solar panels use the energy they collect to keep the surface temperature a few degrees warmer than freezing. This means the panels are heated and will keep the roads they are installed on free of ice and snow.

Another unique feature of the solar panels is the LED lights that are installed. These lights can be programmed to display lane scape designs, warning signs and can change parking lot configurations. This means roads never have to be re-painted.

In 2009, the Brusaw’s received a contract from the Federal Highway Administration to build the first ever Solar Road Panel prototype. They are continuing to develop this technology in phases and completed construction on a Solar Roadways prototype parking lot in their own backyard. The parking lot is fully functional with solar cells, LED's, heating elements, and the textured glass surface. They are in the process of load testing, traction testing and impact resistance testing before they expand the application of the solar panels.

So far, the Brusaw’s have raised over $2 million for their efforts and hope to raise more. “If all the roads in the US were converted to solar roadways, the country would generate three times as much energy as it currently uses and cut greenhouse gases by 75%,” Scott Brusaw says.

While the Brusaw’s are developing their technology for broad use, in November of 2014 a Netherland based company called SolaRoad, installed approximately one hundred meters of embedded solar panels on a bike path in the town of Krommenie. Around 2,000 people ride on this two lane path every day and now the path has become even more useful. The power generated by these panels will be funneled into the national energy grid.

Solar cells for these panels are fitted in one travelling direction underneath a tempered glass top layer which is approximately 1-cm thick. Because of the angle (lying almost flat), the company feels these solar panels will only generate 30% of what a conventional roof mounted panel would produce. As of December 12th, the panels had produced 350 kWh of electricity. This was at the top range of SolaRoads’ expectations, generating enough energy to supply electricity for three houses.

But are they sustainable?

Sure all of this sounds great, but is it realistic? The SolaRoad bike path in the Netherlands had an estimated cost of $3.7 million – and that’s just for about 400 feet of solar surface. Overall, the cost and complexity of solar panel roads have made many experts feel they are a frivolous option next to the traditional paving materials used in concrete or asphalt roads.

According to uniquepaving.com, changing over to solar roadways would increase the cost of creating and maintaining roads 40 times more expensive. By the time the costs of maintenance and repair are factored in, the process of repairing a simple pothole will pale in comparison.

While it’s important to continue to look for less expensive and more sustainable options for our roads, it seems solar surfaces still have a long road ahead of them to become a viable option for daily use.

Caltrans Looks to the Sun for Transportation