Autonomous robots, electronic roads, 3D printing and self-healing concrete are just a few of the possible technologies that could become common place in the construction industry 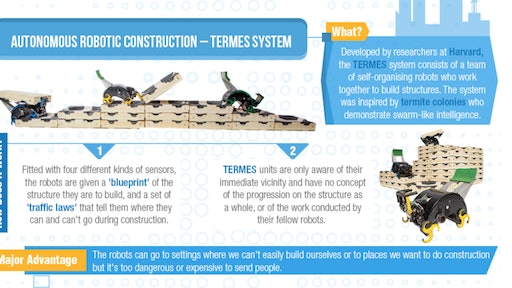 Construction robots - both those that can work on their own and ones that still need a human crew to operate - are being developed for the construction industry.

The construction industry is always changing and adapting to new demands, processes and technology. Trying to predict what's down the road (or just around the corner) for the industry can be a difficult challenge.

No one wants to lose their job to a machine, but robot construction workers could be a possibility. The Termes system by researchers at Harvard and was modeled after termite colonies. These self-organizing robots would work together to build structures. The robots would be given a blueprint for building and a set of "traffic laws" that where they can and can't go during construction.

The benefit of these construction robots would be the ability to build in places it isn't easy or cost effective for humans to go. The downside could be a loss of jobs.

In addition to the Termes system, there is also the SAM (Semi-Automated Mason) 100 brick laying robot, which made its debut at World of Concrete 2015. Built by a New York robotic firm, SAM still needs a crew of three to operate but is capable of applying mortar to brick, setting the brick and moving a long a face wall predetermined by a laser. The self-contained SAM can lay a brick every 20 to 25 seconds. At World of Concrete, SAM built a 2,640 modular brick wall with one mason and one tender in just 16 hours.

This technology may be part of the not-so-distant future. A few examples of 3D printed homes and structures have already been completed. Some of the major advantages of building with 3D printing is the elimination of waste, transport costs and standardization of elements. However, 3D printing does require the creation of rather large 3D printers and the need for places to store the printers and the elements they are printing.

Smart roads would incorporate technology that allows electric cars to charge while they are traveling. The benefit is a decrease in the need to refuel and depletion of fossil fuels.

An engineer in Missouri has already proposed turning Interstate 70, which is in need of repairs, into an electronic interstate. Tim Sylvester proposed a $4 million pilot project to test the pavement on a short stretch of non-interstate road. Sylvester envisions an electronic interstate that would not only charge electric cars but also alert road professionals when there are icy spots or when work needs to be done, among other high-tech features.

In addition to possibility of electronic roads, engineers are also experimenting with solar roadways. In 2006 engines Scott and Julie Brusaw began developing solar roadway technology with the goal of replacing any pavement with smart, micro-processing and interlocking solar panels that could generate electricity and provide a sustainable driving surface.

Benefits of these solar roads include being able to keep the surface temperature warmer than freezing keeping the roads free of ice and snow. The solar roads would also feature LED lights that can display lane scape designs, warning signs and change parking lot configurations.

The Brusaws received a contract in 2009 from the Federal Highway Administration to build a Solar Road Panel prototype. They have been developing this technology in phases, and have completed a prototype parking lot in their backyard which they are working to load test, traction test and impact resistance test.

The Brusaws say that if all the roads in the U.S. were converted to solar roadways we could generate three times as much energy as we currently use and cut greenhouse gases by 75 percent.

SolaRoad, a Netherlands-based company, is also experimenting with solar road technology. In November 2014, SolaRoad installed about 328 feet of embedded solar panels on a bike path. Within just one month, the panels had produced 350 kWh of electricity, which was at the top range of SolaRoads' expectations and enough electricity for three houses.

While the benefits of solar roads sound great, the cost is still a factor. The Netherlands bike path had an estimated cost of $3.7 million. An estimate from uniquepaving.com predicts changing over to solar roadways would increase the cost of creating and maintaining roads 40 times more expensive.

Self-healing concrete is a concrete mix embedded with capsules of sodium silicate which rupture and release a gel-like healing agent that hardens to fill the void when a crack forms. The advantages would be the elimination of concrete cracks and expensive concrete maintenance.

Carbon Dioxide as a building material

The Gutter Masters infographic also mentions permeable concrete, but that has been a viable building material for the construction industry for some time — although it isn't necessarily a widely-accepted material yet. Permeable, or porous pavements, can help with water run-off and standing water issues. It could also decrease the need for retention ponds.

What do you think?

3D Printable Mortar to be Released in 2016