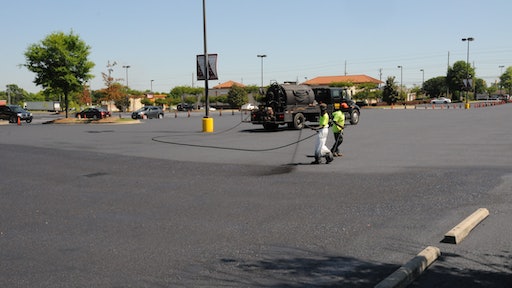 Adding sealcoating to the company’s offerings significantly grew the business, and ultimately keep it running through the recession.

“When the going gets tough, the tough get going.”

Never does this old proverb ring more true than in a recession. Just ask a business owner who has survived his share of tough times.

Mark Alexander, owner of Alexander Sealcoating & Striping Inc., Montgomery, AL, knows all too well the heat a recession brings. Having pushed his paving and sealcoating business through the recession of 1992 and the 2008 economic dip, he knows the ins and outs of running an efficient company. To keep his business afloat, Alexander employs crew members with integrity and passion to do good work, all powered by a fleet of high-quality, reliable equipment.

Alexander Sealcoating began in 1959 as a parking lot paving company focused on residential and commercial asphalt jobs, such as paving and crack filling.

Mark Alexander took the business over from his father in 1989 and purchased a trailer-mounted 550T sealcoating machine from Neal Manufacturing to broaden the company’s offerings. Alexander didn’t know it at the time, but adding sealcoating to the company’s offerings would significantly grow the established business, and ultimately keep it running.

Although Alexander describes it as a “nothing special small business,” those who have benefited from the family-owned company’s work disagree. With years of experience in traffic flow and close attention to quality control, the company maps out what makes the most sense for each business. Alexander looks at not only the end result of a new parking lot, but the construction phase, as well, to ensure stores can stay open through the project with little interruption.

The typical job is about 11,000 or more square yards, which mainly encompasses parking lots for shopping centers, apartment complexes and military bases.

This expertise and reputation is what gives Alexander the confidence to guarantee the company’s work. But, until they offered sealcoating, they couldn’t complete the entire job for their customers.

Without sealcoating and striping, Alexander said they weren’t getting as much business as they could have overall. And, although the sealcoating portion of the business is only about 20%, it had a bigger impact when it came to booking jobs. Plus, transitioning to a full-service company meant Alexander Sealcoating could potentially be the only company working on each parking lot project in his area.

“When you offer sealcoating and striping, property owners are more likely to call you to do the other jobs,” Alexander said. “We didn’t want businesses going to anyone else for parking lot-related work in this city and beyond.”

Just as he suspected, adding sealcoating to the company’s scope made Alexander Sealcoating a full-service parking lot company and helped them seal the deal – literally and figuratively – for more clients.

Since the expansion in 1989, Alexander has kept up with the growth by purchasing two additional Neal 550S skid-mounted machines and a custom-designed unit for the back of one of Alexander’s trucks. It uses an auxiliary motor so two of the hydraulic-powered piston pumps run independently from one another. This way, crews always have a backup pump. Finally, Alexander purchased a 5,000-gallon skid storage tank with an electric super sand pump.

With the 5,000-gallon storage tank in the fleet, Alexander also can mix material overnight. The crew hauls it to the site the next day to fill the truck and sealcoating machines to save mixing time on the job.

“We still have to spend the time mixing the materials, but we can do it when the project closes down for the night,” he said. “That way, the next day we can be as efficient as possible, because our seven hours of mixing materials is already done.”

This equipment mix enables Alexander Sealcoating & Striping to put down more than 150,000 raw gallons per year on residential and commercial projects. The skid- and trailer-mounted units also are capable of transferring as much as 100 gal. of material into the tank per minute.

Aside from overall efficiency, Alexander recognizes the livelihood of his company came down to the 1989 expansion. Without the addition of sealcoating, it’s not likely the company would have survived the recession of 1992 or 2008.

Alexander said the company has always had good financial planning and a solid work ethic. Even so, he said, getting through the 2008 recession was the most difficult time the company has seen.

“It was the hardest thing I’ve done. Only one out of every four companies in our industry made it. We were losing 50% of our gross income. It was extremely tough to make it work,” he said. “If it weren’t for those low-maintenance machines ­–­ and the sealcoating aspect of our business – we wouldn’t have made it.”

“Success, to me, is a repeat customer,” Alexander said. “That’s what we work for ­– doing a really good job to get hired again in the future.”