The Importance of Covering Up During the Winter Months 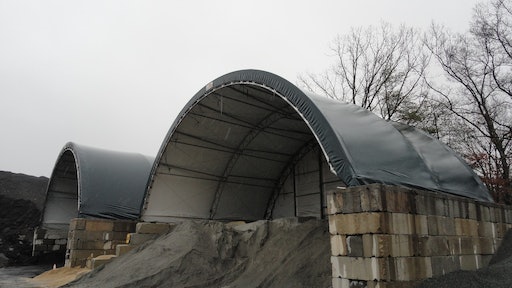 Here we are, looking at another winter. Most northern asphalt plants shut down, lying dormant for several months until the weather clears enough to allow operations to resume. This isn’t much of an issue for most plants because you generally don’t pave in the snow and ice anyway.

But for every circumstance there is an exception. Enter Riley Brothers in Bellingham, MA. They are a utilities contractor with a thriving business that includes paving back whatever work they've recently completed. The nature of their utilities business does not allow for winter shutdowns.

I was called to work on their plant early in February. I had no idea that they were running every day. That never crossed my mind until I got there, drove through the snow to the plant and saw the drum spinning. There was about 8 inches of snow everywhere, but their fines stockpile and their RAP was clean and dry thanks to some “Clear-Span” covers over both areas.

These covers prevented the vast majority of the materials from being exposed to the snow and water. The coarse materials are still wet, but their percentage in the mix design is low and this meant their overall surface area to hold water is also low. The overall percentage of water in the incoming aggregates is less than 6% and the RAP moisture content is also low.

Riley Brothers also enclosed the bottom sides of their feeders and installed heaters. Inside this enclosure was a pleasant 70° even though it was in the low 30s outside.

Another area they needed to address was their air system. The main compressor is in a large, heated building. There are huge air dryers inline before the compressed air leaves the building. The silos are heated by hot oil, and the air reservoir on the top of the silo receives heat that rises from the silos. The silos are skirted and the heated cones of the silos provide enough heat underneath to keep the air reservoirs, air-dryers and solenoids to work reliably.

Overall I was very impressed by Riley Brothers’ approach to running in adverse conditions. We only had one problem during the weeks I was there. And that was actually my bad. First morning I started up the plant and pre-heated the baghouse while I ran the belts to clean the snow off them. When I was ready to run I started the blending process. I was watching the material coming out of the mixing drum looking for good mix so I could shut the drag reject gate. After about a ton and a half the mix looked good so I sent it up. When I closed the reject chute I realized that I should probably have cleaned off the top of the drag.

Sure enough, about 10 tons into the run, the top sheet metal doors on the drag warmed up enough so that the snow slid down into the drag boot, melting instantly and cooling out the mix. I opened the reject gate and the messed up mix fell on the ground. I wasted about three tons which irritated me considerably.

Like all plant operators I pride myself in minimizing plant waste. If a plant is operated correctly, three tons of waste is a lot for the whole DAY. Even large 400-tph plants can be operated with minimal waste. It is simply a matter of proper set-up and training. Anyway, the snow mistake was not one I repeated for the rest of my time at the plant.

Even if you do not plan on running in snowy conditions like this asphalt plant, the Clear-Span stockpile covers are indispensable for keeping your stockpiles as dry as possible. As you know, water costs money to remove during the drying process.

If we can prevent some of it prior to putting the aggregates into our drum then we are saving money in fuel. These covers run under $20,000 each. I wonder how much fuel you need to save before these are paid for and making you money?