What is Asphalt Roller Oscillation Technology?

Since oscillating rollers help improve productivity and create a smoother finish on challenging mixes, it's no surprise this technology is gaining momentum in the asphalt industry 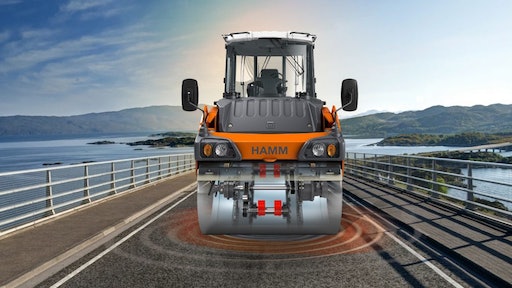 Trends in technology on construction equipment are changing often. While roller oscillation was developed in the 80’s, the systems are becoming more widespread in order to combat challenging compaction applications like thin lifts.

So just what is oscillation and how can it improve your business? We asked roller manufacturers to weigh in.

Oscillation technology was introduced in Germany in 1983 as a solution to over compaction.

With these vibe systems, the drum stays in constant contact with the material allowing the roller to deliver dynamic compaction energy to the asphalt layer as an alternative to traditional vibration.

“Oscillation is a non-vertical force that applies energy for compaction without impact. In other words, there is no vibration or up-and-down movement. The drum stays in contact with the surface, and there are no repeated impacts to the surface for compaction,” Mark Eckert, product manager for Volvo Construction Equipment says.

The technology cancels vertical motion of the drum and creates horizontal motion only. This provides more compaction force than static rolling but less force than traditional vibration.

“With a vibratory drum, you still keep impacting and impacting the mix and eventually you’re going to crush the material,” Evans says. “With an oscillation drum, the surface is the forgiving agent. The drum slides you have no risk of crushing the aggregates.”

Oscillation can help contractors achieve higher density numbers, getting them closer to bonus money simply because of the way the drum interacts with the mix.

“The oscillatory compaction motion is created by eccentric weights phased to each other create a rotary movement measured as tangential amplitude,” Bryan Downing, global sales consultant at Caterpillar, Inc explains. “The oscillatory system creates asphalt compaction via a massaging motion which creates motion of the aggregates, allowing them to realign in a denser matrix. This massaging motion transfers compaction energy to the asphalt layer and less energy transfer into surrounding structures and infrastructure below the layer.”

Where to Use It

Since oscillation creates a more gentle compactive effort, the systems are especially important when working in tight spaces or on thin lifts.

“These rollers are suited for compacting thin lifts, tender mixes, joints, bridge decks or when working near structures,” Bert Erdmann, heavy compaction product manager with BOMAG says. “Additionally, the oscillatory exciter system allows the roller to be used on mat temperatures that are lower than typically allowed for standard conventional vibration. This is mostly because oscillatory excited drums do not “impact” the asphalt mat like a conventional roller, and, therefore, they don’t crush the aggregate, as density increases are achieved through manipulation.”

Sensitive applications are also ideal for rollers equipped with oscillation.

“Traditional vibration can damage surrounding structures and materials,” Eckert says. “Oscillation eliminates that higher level of force that can damage sensitive applications and the surrounding environment. Operators can turn vibration off on traditional rollers and perform static rolling or use pneumatic tire rollers, but oscillation provides enough force to achieve compaction quicker than static rolling while still not damaging the mat or adjacent structures.”

“Many cities prefer the use of these rollers at night because they don’t make as much noise as a traditional vibratory roller because you’re not constantly impacting the material,” Evans says. “Also, if you’re working in a downtown populated area, oscillatory rollers are a good fit because they don’t create those unwanted vibrations to the surrounding structures.

“In addition, if you’re rolling over old drainage pipes, fiber optic cables, etc., you run the risk of collapsing those with a vibratory roller,” Evans continues. “You don’t have that risk with an oscillatory roller and you also won’t create cracks in neighboring structures.”

Oscillation is also useful for joint compaction as most asphalt contractors have to deal with hot and cold lanes when they pave.

“When a paved and compacted lane has already cooled down, if you come and hit the new material with a vibratory roller, you’re not only going to push the new material down, you’re also going to compact that cold joint again and crush it,” Evans says. “Oscillation will squeeze that material down without causing any adverse effect to the cold, pre-compacted side.”

How to Use It

Oscillation systems do not require any additional settings or training to use as it’s considered a self-regulating amplitude that operators can turn on and off. Still, oscillation shouldn’t be used in all circumstances. It’s important contractors use conventional vibration in the breakdown (initial pass) compaction position.

Therefore, oscillation is best used in the intermediate and finish positions.

Due to the effective compactive nature of oscillatory rollers, many contractors find that with an oscillatory roller, they can improve productivity by eliminating that third finish roller on a jobsite and still achieve the same results.

“Oscillatory rollers can be used as both intermediate and finishing rollers,” Evans say. “Often times we’ve found that the use of a typical breakdown roller and an oscillation roller will be enough to achieve compaction. The oscillation roller provides the smoothness so you don’t need to run a third roller in static mode.”

“Rolling speed control is important for oscillation as well as vibration, unlike static rolling,” Eckert says. “Rolling with oscillation versus static rolling will reduce the number of passes necessary to achieve target densities.

Similar to conventional vibratory systems, too high of travel speed for an oscillatory system can result in undesirable surface finish and tearing and/or pushing of the asphalt layer.

Erdmann adds that contractors must also keep an eye on mat temperature when using an oscillatory system.

“When the mat temperature drops, the operator must keep an eye on the temperature gauge and turn off the standard vibratory drum, once the critical temperature is reached,” he says. “The operator can continue rolling with the oscillatory system on for approximately another 15 to 20° F, depending on the type of mix being compacted.”

Most contractors know that once a mix hits 175° F, there should be no more vibration on the mix, but with oscillation, there is still time to achieve ideal density numbers.

“If you have any viscosity left in the mix at all and you still need to hit those bonus numbers, you can use the oscillation as low as 130° F,” Evans says. “As long as the material is still moving, you can use oscillation safely at any temperature."

This also means oscillation is ideal for compacting in cooler temperatures since you can work for longer into the season.

Due to the nature of oscillatory compaction, the drum stays in direct contact with the mat surface for a longer period of time compared to conventional vibration.

“Over time, this can potentially lead to drum wear and a thinning of the drum shell,” Bert Erdmann with BOMAG says. “Contractors using early models of competitive oscillatory rollers in some applications had issues with reduced drum life.”

Therefore, it’s important to regularly check drum mount isolators and belts for damage, as well as monitor the drum shell for thinning or wear at the edges. Operators should also listen for unusual noises.

“There is increased maintenance for oscillation components like drive belts or chains,” Eckert concludes. “For many contractors, the benefits of oscillation far outweigh these issues.”

Oscillation Uses At a Glance

Oscillatory compaction systems can be used on all phases of the compaction process. It delivers the best results when creating compaction in the following areas;