75% of the over 7 million open jobs in America don’t require a four year degree. They require will, work ethic and training. Three things that seem to be in short supply in today’s work force. 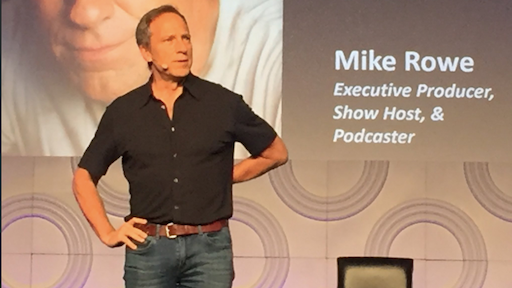 Mike Rowe discusses the “Dignity of Labor” and working to fundamentally change the conversation about trade jobs during the NAPA Annual Meeting.

Last month at the National Asphalt Pavement Association annual meeting, attendees had the privilege to hear Mike Rowe, notorious host of Dirty Jobs, speak to a crowd of over 1,000 asphalt industry professionals. Not only was he funny and entertaining to listen to, but he also used his platform to engage the audience in thought-provoking ways.

Our country is currently sitting with nearly 7 million unfilled jobs. Sure that’s a lot, but what’s worse is that 75% of these open jobs don’t require a four year degree. These jobs require will, work ethic and training. Three things that seem to be in short supply in today’s work force.

“Our country has become profoundly disconnected from the definition of a good job,” Rowe says. “I hear it all the time that companies can’t find the people they need to show up early, stay late and learn a job that’s in demand. Instead, we have $1.5 trillion dollars of debt for student loans that earned degrees that don’t exist in the real world anymore. The country needs an awakening to make a more persuasive argument for the trades.”

Exactly Mr. Rowe. We’re not sure when it happened, but at some point the idea of earning a living by completing a hard day of work became frowned upon. Why? What is so wrong with doing a job that really matters?

Each and every person in our country relies on our extensive highway network to get them to and from their jobs and to make sure their families have the food and supplies they need to live comfortably. So why on earth do we not encourage our kids to do something that absolutely impacts our world for the better?

Rowe suggests a fundamental change in the conversation about these jobs deemed unattractive by certain facets of our society. And it starts with you.

What Can You Do?

Reshaping the ideals of Millenials and other naysayers for the trades isn’t going to be easy, but we need to start a new conversation now if we’re going to change anything. As an asphalt professional, you know the value of what you do. Sure it may not always be easy, but isn’t it always worth it? Maybe you don’t feel accomplished at the end of every day, but once that project is complete? I’ve seen first hand how much pride every worker takes in contributing to that job well done.

A good place to start that new conversation then is right there; by making sure you talk about what we do in a positive light. If we only talk about the negative aspects of our jobs, the long hours, heat and exhaustion that can sometimes come, we are never going to make what we do seem attractive.

In fact, a recent survey by Reester & Associates for the asphalt industry showed that 75% of new hires were coming from current employee referrals. Once you’re in, you love it.

So focus on the good things when talking about our jobs. The competitive pay, the training opportunities, the camaraderie of the team and that amazing feeling of a good crew finishing a great job.

What we do matters. Let’s let the world know.

How are you attracting people to your job for the 2019 season? I’m always open to hear what’s working, and what’s not: jlombardo@acbusinessmedia.com