Voters in key swing districts of 2020 battleground states overwhelmingly support a robust federal infrastructure plan, according to a new poll. 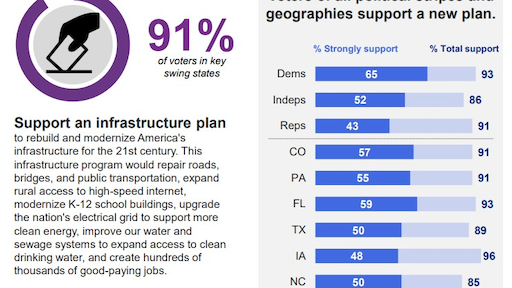 Voters in key swing districts of 2020 battleground states overwhelmingly support a robust federal infrastructure plan, according to a new poll.

The survey found 91 percent of 1,505 likely voters in Colorado, Florida, Iowa, North Carolina, Pennsylvania and Texas support increasing investment over the next decade to rebuild and modernize America’s infrastructure. The support was consistent across demographic groups, including rural and suburban voters, and particularly high among suburban women.

the nation's electrical grid to support more clean energy, improve our water and sewage systems to expand access to clean drinking water, and create hundreds of thousands of good-paying jobs.

To get this done, the group said voters need to hear from leaders about what infrastructure will do for their daily lives—not the same old vague ideas and empty promises. Voters feel politicians’ overuse of “infrastructure” has turned the word into an empty political bromide.

The findings mirror the results of a nationwide poll commissioned in January by ARTBA and the American Public Transportation Association (APTA). It found 90 percent of likely voters believe the Democratic leadership and President Donald Trump should work together to pass infrastructure legislation.