By identifying where segregation can occur, asphalt producers and paving professionals can work to prevent this problem 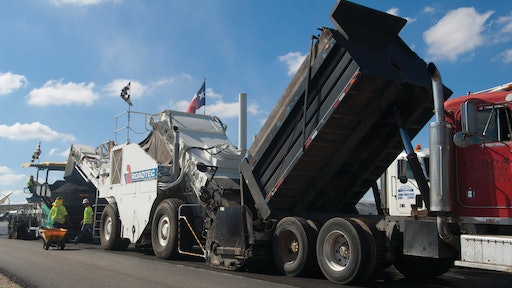 Segregation in asphalt has detrimental effects on the final performance of a roadway. The pavement will have reduced fatigue life, rutting, raveling and moisture damage. These effects can cause a severe reduction in pavement life. While there are many of causes for segregation, there are also many way to avoid it.

Hot mix asphalt mixtures that are properly designed, produced and placed provide a durable, long lasting pavement that requires very little maintenance. However, there are several potentially damaging problems that can occur in the design, production and placement of hot mix paving mixtures.

One of these issues that will eventually lead to a faster deterioration of the roadway is segregation. Segregation is a frequently recurring problem that has caused concern within the paving industry for decades and receives widespread attention by contractors, state highway departments and equipment manufacturers.

While there are many reasons that segregation of asphalt mixtures can occur, there are also many ways to prevent them. Identifying problem areas that can lead to mat segregation will help you prevent the problem from happening down the road.

Segregation at the Quarry

Since segregation is caused by aggregates breaking from the binder prior to laydown, it makes sense that segregation issues can start at the quarry. Aggregates that are meant to be all one size can be altered based on how the materials are handled. There are four main areas at the quarry that can be the cause of segregation:

1.      Aggregate Piles: The outside edges of these piles can be coarser than the inside which tends to be finer as it contains material that has been built by the stacker. For this reason, piles should be blended to mix the outside edge material with the material in the middle prior to loading trucks.

2.       Pile Height: Materials that are being stacked too high with the loader will become even more coarse as the material is constantly rolling down the pile to the outside edge. Keep piles small.

3.       Avoid Ramps: Building ramps can cause the materials to “ribbon segregate” as it’s pushed off the end of the ramp and hits the ground which can lead to coarser material.

Although placing product in a stockpile can endanger its quality, stockpiling material is a vital part of the asphalt production process. As with segregation at the quarry, keeping stockpiles at the asphalt plant in good condition will help reduce segregation during the paving process.

Segregation in stockpiles can also occur for these reasons:

1.       Poor Loader Management: When loading from a segregated stockpile, the loader operator will attempt to blend material from the fine and coarse portions. This is best accomplished by drawing the material evenly from the edge of the pile perpendicular to the belt, thereby loading material from both the front and back face. Loading exclusively from either the front or back face of the stockpile will result in loads that are overly fine or overly coarse. Careful and even loading can prevent further overrun segregation. Aggregate piles should also not be driven on as to avoid contamination and degradation.

2.       Uneven Stockpile Layering: The formation of a continuous layered stockpile will reduce the effects of segregation and eliminate the need to reblend the base before shipment.

Stockpiles can be built manually or using stackers and each method has their advantages. Manual loading requires no special equipment, but there are more changes for segregation to occur while stackers and conveyors can reduce segregation but are also much more expensive.

3.       Moisture Management: Keeping stockpiles clean and dry are two important steps to avoiding segregation. Stockpiles should be sloped to allow for proper drainage from the pile. If it is not possible to cover stockpiles, loader operators need to be sure to pull from the drier end of the pile and never from the top.

Segregation at the Asphalt Plant

Besides the stockpile, there are several other places at the plant where segregation can occur.

Cold feed bins may not be feeding uniformly which can lead to segregation. Consider blending or mixing the face of the bin before filling the load bucket. Any minor amount of stockpile segregation in the bin is usually eliminated with this approach.

Care should also be taken to make sure the right material is fed into the bin. Since loader operators are completing repetitive movements all day, there is a higher chance for them to put the wrong material in the bin.

The drum is paramount to the result of the mixture being consistent and any buildup on mixing flights can interfere with the tumbling action in the drum. This creates segregation as large stones will consistently roll to one side in the mixing chamber.

Feed from the drum to the slat should be at 90° to assist with the remixing of the materials. If feeding occurs in line with the drum, the mix can become coarser or finer on one side depending on the effectiveness of the mixing chamber.

There can be also segregation at the slat conveyor if material is not being fed in a consistent manner. As mentioned above, be sure the feed is at 90° at the transfer feed as to avoid larger materials rolling to the outside at transfer points.

You also want to make sure slats are tall enough and moving fast enough to keep up with the production rate. Slats that run to fast can cause segregation as larger stones flip to the outside of the transfer point. Finally make sure material is not rolling over the top of the slat.

Finally, be sure there is no mixing flight or tips that can create dams and spots where segregation can occur.

Finally, storage silos should generally be kept at least one-third full to keep the mix hot and to avoid segregation.

Loading trucks incorrectly will undoubtedly lead to segregation in the mat. When loading, be sure you’re not emptying the cone of the silo as this will inevitably result in a coarse mix.

There is a tendency for material to be deposited in a single pile when loading. This causes coarse material to accumulate in the front, back and to the sides of the truck. Therefore, do not load in one continuous drop and instead use the three-dump method to avoid large particle run-off. First, load against the bulkhead then the tailgate and finally the middle. When the load is then deposited in the paver after this loadout method, the coarse material is the first and last to be deposited in the paver.

The truck should also not creep forward during loading which can cause running segregation in the truck bed.

Segregation during paving occurs as a result of hopper operation, auger speed and disruptions in paver movement. Here’s how to avoid them.

1.       At the Hopper: Failure to fold the hopper wings in frequently during the paving operation can cause both gradation problems and temperature segregation.

2.       At the Auger: Failure to keep the ends of the cross screws full during paving causes larger rock to fall along the longitudinal edges of the mat

3.       Inconsistent Operation: Keep the paver speed consistent and do not allow the hopper to run empty between truck loads; always try to keep the hopper at least 1/3 of the way full.

Segregation in asphalt has detrimental effects on the final performance of a roadway. The pavement will have reduced fatigue life, rutting, raveling and moisture damage. These effects can cause a severe reduction in pavement life. While there are a lot of causes for segregation, there are also a lot of cures. Keep this article handy to help ensure a high-quality pavement that’s free from the effects of segregation.