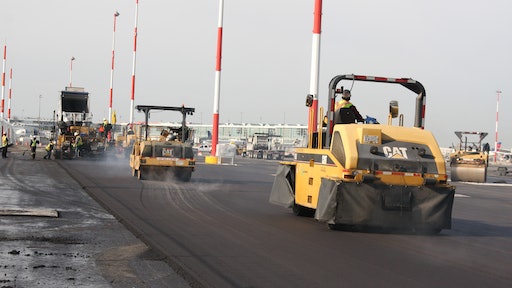 Anyone who has a preconception about Canadians being staid, low-key, and basically conservative in nature, need only look to the ongoing expansion/renovation of Vancouver International Airport (YVR) to see how wrong that impression is. The $5 billion CAD project (a 30-year plan that is actually $9.1 billion when adjusted for inflation) is a reimagining of what an airport needs to be in order to handle an already impressive growth curve that portends even bigger things ahead. So when work was needed to upgrade the runway and create a brand new remote stand operations area, the status quo also took a back seat to the latest GNSS-based solutions available. Using millimeter-grade, stringless milling and paving technology LaFarge Canada, working as a sub to general contractor Jacob Bros. Construction got impressive results in production, was able to keep crew size down, saved huge in capital equipment costs and met a challenging window for completion. Low key, indeed.

Much like its west coast counterparts to the south — Seattle, San Francisco and Los Angeles — Vancouver and the larger British Columbia area are seeing record-setting growth and seemingly non-stop development. That influx of new residents, businesses and visitors has resulted in a dramatic upsurge of traffic into and out of YVR. In fact, estimates indicate that the airport — already well ahead of its target of reaching 25 million passengers by 2020 — will reach 31 million passengers per year by 2022. To better cope with that volume, changes are taking place in almost every segment of airport operations. According to Mike Darby, LaFarge’s involvement began several years ago.

“At that time — it was early 2017 — we had landed a contract to do some milling for an overlay project on the south runway at YVR,” he said. “It was a three-month, 40,000 ton job and we felt it could be the perfect job for Millimeter GPS. Fortunately for us, 2017 was a ConExpo year and we had plans to attend. Working with Mark Piotto and his team at the BC branch of Brandt Positioning Group, we all headed down to Vegas.”

While there, Darby said they looked at two solutions — one from Topcon and one from a manufacturer on whose systems he had a lot of previous experience— so it afforded them a great opportunity to compare the two. The comparisons revealed some striking differences which made Darby’s decision much easier.

In order to get tight vertical accuracies, the Topcon Millimeter GPS solution uses a base station and a series of lasers which create a laser zone accessed by receivers on the machine and the YVR South Runway Project was calling for two mills and two pavers — with machine control on all four pieces.

"We went with the Millimeter GPS from Topcon and, despite it being our first experience with that particular solution, we were very pleased with the results — pleased enough, in fact, to choose it for this project," Darby said.

The project on which LaFarge brought the Millimeter-grade solution to bear was a paving effort to create a remote stand operation (RSO), a gateless area at which aircraft — in this case aircraft heading to and from the U.S. — would park upon landing. Passengers then deplane directly onto the tarmac and board buses which take them to the terminal to clear customs, immigration, etc.

“This approach is widely in use at other airports — particularly many in Europe,” Darby said. “The area on which we were paving was once a standard parking lot, but, as part of the YVR redesign, is being re-purposed as an RSO for ten aircraft.”

Because the specs for a structure capable of supporting nearly a dozen aircraft differ greatly from that of a standard parking lot, the general contractor, Jacob Bros., rebuilt the area from the gravel up using equipment with GNSS-based machine control. According to Nick Leuzinger, LaFarge’s general superintendent, the build-up was substantial — as much as a meter in spots.

“Jacob Bros. used a high-speed John Deere 764 HSD dozer with GPS machine control for most of the subgrade work,” he said. “All told, they put down 600 mm of sand sub-base, 250 mm of crushed granular base, 175 mm of soil cement, and we are capping it all with 150 mm of asphalt. Most of our paving has been done in three 50 mm lifts, but the perimeter of the RSO, which will not be supporting aircraft, is only 100 mm of asphalt done in two lifts.”

The fact that LaFarge opted for a stringless approach to paving the RSO is testimony to how confident they were in the solution itself. Darby said the contract actually called for stringline as the process of choice.

“We knew how we wanted to do it and felt strongly enough about it that we opted to give YVR a credit through Jacob Bros. as an incentive to allow us to switch to Millimeter GPS,” he said. “Our reasons were more than simply personal preference. Using stringline, we would have had to add at least another four workers and a couple pieces of equipment. In addition, staging of the project becomes very difficult when dealing with string, particularly when the paving window is as compressed as this one was at six weeks.”

To illustrate, he said that when paving started, not only was Jacob Bros. still excavating and laying down gravel and soil cement, at any given time, there were as many as seven different trades working on the project. “There’s no way we could have had string running everywhere in that kind of environment. It would have been a nightmare; the stringless solution made the most sense and we went to bat for it.”

Working off the base Jacob Bros. used for the excavation and grading operation, LaFarge set up a pair of lasers which, combined with the GNSS function of the system, provided all the coverage they needed to ensure paving stayed within the prescribed 5 mm on a 5 m straightedge specs. Those two units represented a small fraction of the capital costs they would have incurred with the competitive system. Production rates were excellent as well according to Leuzinger.

“We were shooting for rates in the 1,100 tons per day range — we got that and then some,” he said. “We’ve regularly been breaking 1,200 and 1,300 tons with a maximum of 1,550 tons. It should be noted that a good deal of the credit for our success out here has to do with Brandt’s help. We had some team members who were apprehensive about switching over from the way they’d normally paved. But Mark and his guys have been here all along, providing support, helping them realize it’s nothing to be afraid of, and getting them to trust the technology. Once they were over that hurdle, they took to it really quickly. In a short while, they were working independently which, for a system none of them had used before, is pretty impressive.”

The Eyes Have It

Even the most sophisticated technology sometimes has to take a back seat to good old fashioned visual inspection and that’s the case as Darby looks back at work already done.

“Thus far, we haven’t had to go back and repair any milling deficiencies,” he said. “Despite how complex the composition it and what it has to support, this is essentially a flat parking lot, and typically when we do something like this we will have some deficiencies. Using this solution with three lifts of asphalt, we haven’t had anything yet; that’s impressive to me and speaks volumes to the accuracy of the solution.”

He said theirs is the first division within LaFarge Canada’s group to make the move to Millimeter GPS, but suspects others will be following.

“There has been some discussion among my counterparts in Calgary, Edmonton and Vancouver Island to do so, but I think it’s more a case of them needing a project that is the right fit for it. Ours is the first Topcon system of this kind in all of British Columbia and after two projects now — one milling, one paving — we couldn’t be happier with how things have gone.”