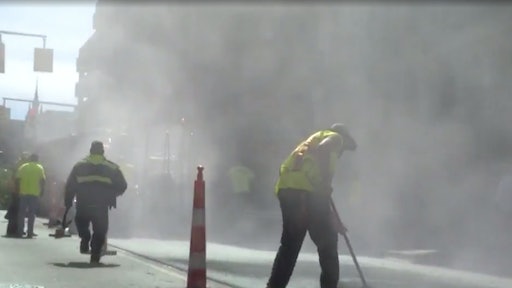 Riots have been held across the nation after the death of George Floyd. While most protests have been peaceful, there are some cities that experienced extensive damage in the wake of the events.

The costs pegged to the riots in Grand Rapids, MI are approaching $2.4 million, which includes damage to municipal property, police cruisers, family-owned businesses and even city streets. While the taxpayers are on the hook to pay for many of the repairs, one asphalt company stepped up to help make the city whole again.

Grand Rapids-based Superior Asphalt got permission from the city to tear up and repave roads downtown that were damaged by the riot for free.

“I felt, personally, and the company felt, that why should the taxpayers be held to pay for it?” said Jeff Kresnak, CEO

The project is a $10,000 job being done as a courtesy to Grand Rapids — free of charge — to help repair the city after seven car fires in the riots.WoodTVof Superior Asphalt. “The city of Grand Rapids is where I grew up and where the company started and it’s just a little bit we can give back.”

It’s a $10,000 job being done as a courtesy to Grand Rapids — free of charge — to help repair the city after seven car fires in the riots.

“Those cop cars burning for so long, it damaged it really bad and severely,” he said. “And in a month or two, it would have been just completely crumbled apart. Now we are coming in with new asphalt to apply an inch and a half over the existing base course of asphalt and what that’s going to do is put us back to where we were prior to the police cars getting burned up.”

Dozens of workers laced up on their day off to help.

“Most of the crew’s all from this community, as well. When we told them what we were doing, they were ecstatic to come down, even though it was an overtime day,” Kresnak said. “Granted, they’d probably rather be out on the lake fishing, but they’re happy to be here.”

It is one more example of West Michigan looking out and hopefully paving the way to a better tomorrow.

“I’ve just followed other peoples’ footsteps that I’ve seen do kind gestures along the way,” Kresnak said. “Like I said, the city of Grand Rapids, the entire West Michigan community has been good to us and it’s just a polite way we can give back.”