At 64 years old, our aging interstates are facing increased congestion, unprecedented levels of travel and a funding backlog of $123 billion to make the repairs and improvements that are needed. 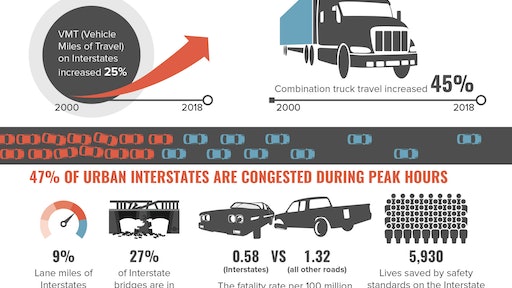 TRIP found that there is a backlog to the tune of $123 billion for the needed repairs and improvements on our interstates. $54 billion is needed to improve pavements, $37 billion to repair our bridges (with 27% of all bridges needing repair) and additional $33 billion required for enhancements and expansions to combat rising traffic and congestion. The report suggested that in order to repair these systems, funding should be increased from the $23 billion that was spent in 2018 on these systems to over $57 billion annually over the next 20 years.

State by State Break Down

TRIP’s report ranks the states by Interstate systems that are the most congested, have the largest share of pavement in poor condition and bridges in poor/structurally deficient condition, have the highest fatality rate, have experienced the greatest increase in vehicle miles of travel (VMT) since 2000, and that carry the greatest share of commercial trucks.

Hawaii is the worst off with 19% of their pavements considered in poor condition. Delaware (11%), Wyoming (9%) and New Jersey (8%) are next in line.

The report found that Rhode Island and West Virginia are the most in need of bridge repairs with 17% and 14% of bridges being structurally deficient in those states respectively.

The report also found that travel on our nation’s Interstate highways is increasing at a rate nearly triple the rate that new lane capacity is being added. From 2000 to 2018, vehicle travel on Interstate highways increased 25%, from 662 billion miles traveled annually to 829 billion miles. From 2000 to 2018, lane miles of Interstates in the U.S. increased nine percent, from 208,502 to 226,626 miles.

The full state-by-state breakdown can be found here.

The ability of states to invest in Interstate highway repairs and improvements may be hampered by the tremendous decrease in vehicle travel that has occurred due to the COVID-19 pandemic, which the American Association of State Highway and Transportation Officials estimates will reduce state transportation revenues by at least 30% – approximately $50 billion - over the next 18 months.

"Today, the Interstate Highway System continues to save Americans time, lives and money while playing a critical role in supporting economic growth and enhancing the lifestyle choices of the nation’s residents and visitors," the report says. "If Americans are to continue to enjoy the benefit of the unparalleled level of access and mobility provided by the Interstate Highway System, which have enabled the nation’s unprecedented development and growth, the U.S. will need to commit to a well-funded program of Interstate restoration, modernization and renewal."

TRIP suggested the following be done to improve our Interstate system: