With the federal gas tax at 18.4 cents per gallon since 1993, states have had to raise revenues to cover a more-than-125% increase in construction costs. 61 transport-funding measures started making their way through legislatures in January 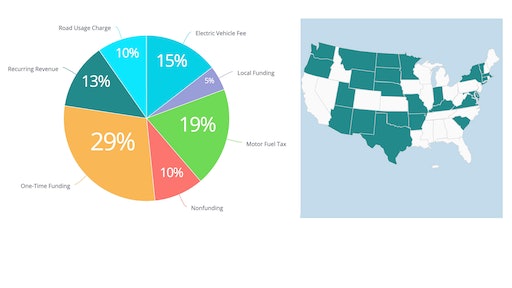 For more than 25 years, the Federal government has let the Highway Trust Fund, the source of money for Federal infrastructure projects, lose it's purchasing power. That's because the gas tax has been stuck at 18.4 cents per gallon for gasoline and 24.4 cents for diesel fuel since 1993.

While construction costs have increased 125% since 2003, funding has not. Instead of waiting for Washington to get it together, states have taken it upon themselves to fund their own infrastructure projects. With talks of infrastructure funding stalled in Washington, states are left to pick up the tab once again. According to ARTBA’s Transportation Investment Advocacy Center (ARTBA-TIAC), 25 states introduced 61 transportation funding measures during the month of January.

They are seeking to bridge construction and repair revenue shortfalls created by past failures to keep up with investment needs, economic disruption caused by the COVID-19 pandemic and uncertainty about the next federal surface transportation reauthorization.

States and the types of funding legislation being explored to date include:

Twenty-nine percent of the bills are one-time funding measures to boost revenue mainly for specific projects that need to be completed. Nineteen percent of the bills introduced support gas tax increases in seven states. Hawaii is proposing to change the flat state gas tax to a variable-rate tax based off changes to the wholesale price per gallon to the retailer while Missouri is proposing to gradually increase the motor fuel tax over time.

The industry continues to wait for the federal government to fulfill its promise and enact sustainable funding for our infrastructure. Until then, states will continue the charge to fix their failing highways and bridges on their own.