The 2021 Texas Infrastructure Report Card was unveiled this week, indicating the state improved slightly since the 2017 Report Card with the grade of C 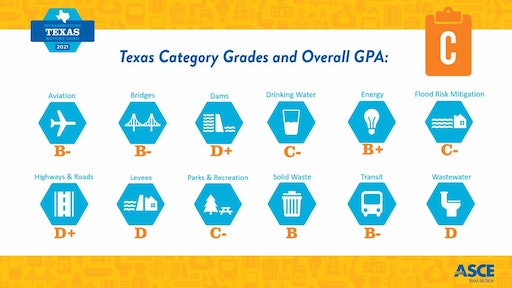 Everything is bigger in Texas, including the need for upgraded roads and bridges. As the geographically largest continental state, Texas has the largest infrastructure with an ever-increasing need for improvement. In 2017, Texas was given a C- infrastructure grade from the American Society of Civil Engineers (ASCE), showing that the state’s infrastructure lacked funding, proper maintenance and was poorly equipped to deal with environmental change as Texas continues to grow.

While many areas that were properly addressed saw improvements in their grade, sectors that were not improved over the last five years brought the states overall grade down.

“The ASCE Texas Infrastructure Report Card is a critical tool as we assess our needs and measure progress in actively building Texas into a better place to live, work, and raise a family,” said Representative Dennis Paul, PE “We must continue to work together with all levels of government, community leaders, industry partners, and universities, using this invaluable resource to help keep us better informed about the issues facing Texas.”

Texas, with approximately 313,600 total centerline miles of roadway facilities, has more roadway lane miles than any other state. As Texas sees an average of 1,000 people heading to the state each day, the current gas tax funding is not keeping up with the need to improve the states roadways

The State’s economic growth depends on the efficiency, reliability, and safety of our highway system, supporting individual mobility, commerce and industry needs. From 2015 to 2020, Texas’ population grew by nearly 9% and roadway conditions saw modest improvements pointing to positive outcomes and a continued need for infrastructure expansion and updates.

From 2010 to 2016, daily vehicle travel rose nearly 16%, resulting in many Texas motorists are seeing increased delays, limited roadway capacities, and deteriorating conditions. Auto commuters in Austin, DFW, and Houston face significantly more congestion than the national average. The average Texan spends 54 hours in traffic at a cost of $1,080 annually.

"Current funding levels and resources from the state’s gas tax are inadequate to keep up with Texas’ projected growth, leaving a $15 billion annual gap through 2040," Mark Boyd, ASCE Texas section IRC committee chair, PhD, PE, said. "While some of Texas’ urban centers are seeing trail and bikeway improvements and voters supported transportation funding increases in 2014 and2015, a continued, collaborative effort from the public, state legislators, and professionals is needed to “keep the foot on the gas” in guiding the state’s roads in the right direction."

You can see the full 2021 Texas Report Card here and look for the National Infrastructure Report Card card to be unveiled March 3rd.