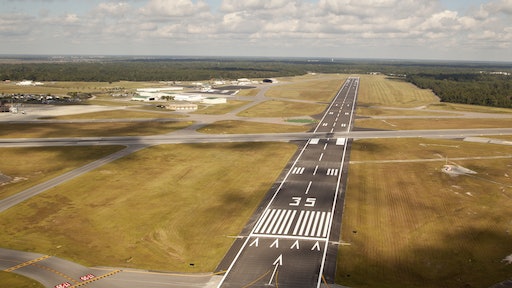 The National Asphalt Pavement Association (NAPA) announced today that S.T. Wooten Corp. of Wilson, N.C., has won the 2014 Ray Brown Airport Pavement Award for excellence in construction of an asphalt airport pavement. The company received its award today (Jan. 28) at a ceremony during the association’s 60th Annual Meeting in Marco Island, Fla.

The Ray Brown Airport Pavement Award is presented each year to the highest-rated airport project submitted for a NAPA Quality in Construction Award, which recognize asphalt pavements of excellence. The award is named for Ray Brown, who served many years as Director of the National Center for Asphalt Technology at Auburn University in Auburn, Ala.

“We had to put down the fabric interlayer because of the transverse cracks in the pavement that the milling didn’t get out,” said Chris Croom, Division Manager for S.T. Wooten Corp. “The fabric covers the cracks so it doesn’t reflect back through the new asphalt.”

The FAA P401 specification for asphalt pavement on airport runways is a tough requirement to meet, Croom said. From the mix design to testing to laydown — rigorous requirements are expected to be met.

Project specifications required the use of a PG 70−22 binder in the mix placed on the first layer of paving and PG 70−28 on the final layer. This order of pavement structure was a first for S.T. Wooten, and part of the requirement to help prevent reflective cracking, he said.

“The tight conformity with the specification is one of the things that brought attention to the project,” said Croom. “It starts with the quarry that supplies the virgin aggregates to the plant people themselves, on to the front-loader man, and all the way through to the plant operator, just making sure everything runs correctly.”

Another key component, according to Croom, were the quality-control technicians at the plant and at the jobsite. It was a constant round of temperature taking and mix sampling to make sure the asphalt mix was in tolerance of the specifications.

“We had to have the accurate number of rollers required to get density,” Croom said. In addition, technicians were on hand while laydown took place to make sure the runway was paved to proper compaction.

“We never had any failures as far as mix requirements at the plant or the mix requirements on the runways,” said Croom. “It was just a good project. We didn’t really have any problems with scheduling. It all went very smoothly.”

The project resulted in a smooth runway that conformed with the exacting mix and density specification requirements. The project was completed on time, and was well received by the community and the New Hannover County Airport Authority.

“All who use the airport said they are extremely satisfied with the final results,” said Julie Wilsey, Wilmington International Airport Director.

“We had our first-ever ‘5k on the Runway Run’ as a sort of ribbon-cutting ceremony,” Wilsey said. “We are very pleased with the brand-new asphalt, groovings, markings, and especially the beads at night on the pavement. It’s beautiful.”