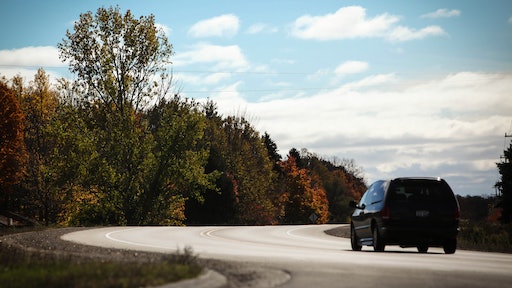 The National Asphalt Pavement Association (NAPA) announced that Northeast Asphalt Inc. of Green Bay, WI, is the winner of the 2014 Sheldon G. Hayes Award for excellence in construction of an asphalt pavement. The award, bestowed annually since 1971, recognizes the country’s highest quality highway pavement. The company received its award today (Jan. 28) at a ceremony during the association’s 60th Annual Meeting in Marco Island, FL.

Northeast Asphalt Inc. and the Wisconsin Department of Transporation Northeast Region were named the winner for Northeast Asphalt’s work on State Trunk Highway (STH) 22 from Gillet to Oconto Falls, WI. In the spring of 2012, just prior to the start of Northeast Asphalt’s mill and overlay project, a utility conflict running along both sides of the 8.1-mile project was discovered, threatening to wreak havoc with planned completion before year’s end.

“In the typical utility relocation, it would happen just prior to us coming in and doing any work,” said Ric Szalewski, Project Manager at Northeast Asphalt for the winning project. “But they were anticipating a couple of months to relocate those utilities and there was talk of delaying the project until 2013.”

Everyone involved in the project came together to discuss options. In the end, innovative thinking saved the day.“We came together with our dirt contractor, Relyco Inc., to use Spar underground mapping technology, ground-penetrating radar, and advanced software to locate the utilities within a three-dimensional space,” Szalewski said.

With this utility conflict solved, Northeast Asphalt was able to complete the project quickly and efficiently. The company was anxious to submit this job for a Sheldon G. Hayes award only to face another unexpected hurdle: the weather. Winning pavements of the Sheldon G. Hayes award are scrutinized only after surviving one winter season after completion.

Because Northeast Asphalt’s STH 22 project was completed so late in 2012 — Oct. 30 — the company had to wait until 2013 to submit its entry. Thus, the pavement was evaluated with two winters under its belt, including the winter of 2013–2104, one of the harshest on record.

“I looked back through the records in this area, and there were 59 days during the winter when temperatures were at or below 0° Fahrenheit,” said Brett Stanton, Director of Engineering Services for Northeast Asphalt said “That was particularly unique, and [the road] looked very good for the rough winter it went through.”

Northeast Asphalt was also able to procure a cost reduction incentive (CRI) modification to the original contract. “We partnered with the Wisconsin Department of Transportation to evaluate the pavement, and we realized we could save the DOT $160,000 if we changed the pavement structure and used some of the existing materials on site,” Stanton said.

While some of the materials were new, “we imported far less by utilizing what was there,” Stanton said. In the end, recycled asphalt material reduced the company’s need for virgin asphalt by 24 percent with the 12.5-mm surface design mix and 23 percent with the 19.0-mm binder mix.

The Sheldon G. Hayes Award winner and finalists are determined through a rigorous two-year evaluation process. Any highway pavement project using more than 50,000 tons of asphalt is eligible for consideration. Initially, the project must win a Quality in Construction (QIC) Award, which is determined by numerical scores given by pavement engineers at the National Center for Asphalt Technology (NCAT) on the basis of how well the contractor met specifications and achieved density on the finished pavement. All the pavements that meet a benchmark figure earn a QIC Award.

The year after a project wins a QIC Award, it is eligible for consideration for the Sheldon G. Hayes Award. The top-ranked projects from each year are tested for smoothness, and then visually inspected by an independent pavement consultant with many years of experience in the industry. This year, the evaluators praised the all the candidates for their high-quality construction practices, which resulted in smooth, safe, and durable pavements.

In addition to Northeast Asphalt, finalists for the award were Koss Construction Co. of Topeka, Kan., for its work on Interstate 40 in Prairie County, AK; Norris Asphalt Paving Co. of Ottumwa, IA, for the wooded and hilly section of U.S. 34 in Wapello County, Iowa; and Payne & Dolan Inc. of Waukesha, WI, for 7 miles of highway on Interstate 43 in Muskego, IL.