The average American only contributes 1.2% of the annual cost to own and operate a motor vehicle to fund federal investments in highway and transit capital improvements 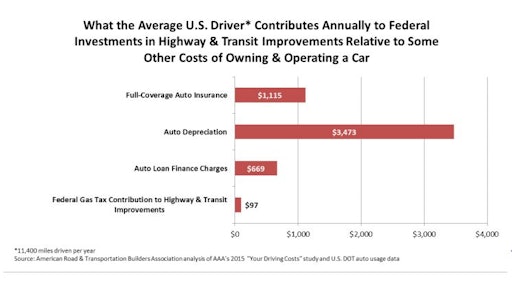 We all want safe, well maintained and uncongested roads, but a new analysis shows the average American driver is only being asked to contribute 1.2% of the annual cost we pay to own and operate a motor vehicle to fund federal investments in highway and transit capital improvements. We spend over 11 times more than that each year for auto insurance.

The American Road & Transportation Builders Association (ARTBA) analysis looked at AAA’s just-released 2015 breakdown of motor vehicle ownership and operating costs and matched it with a calculation of how much the average motorist pays each year through the 18.4 cents-per-gallon federal gas tax, based on data from the U.S. Department of Transportation. The gas tax collection is dedicated to Highway Trust Fund (HTF) supported programs.

ARTBA’s research is the first to look at how much a driver is personally investing each year to build and maintain the important highway and transit infrastructure that is so critical to individual users and the nation as a whole.

The HTF is important, ARTBA says, because it focuses its resources primarily on supporting state capital investments in the nation’s most heavily traveled roadways and transit systems. It provides, on average 52% of the annual capital investment in highways and bridges.

The amount individual road users contribute to the federal investment in surface transportation infrastructure is established by the federal gas tax rate. Since 1993, the rate has been fixed at 18.4 cents-per-gallon. This excise is not a%age sales tax applied to the total price of our gas purchases, nor is it assessed at the pump. It is collected when gasoline is removed from bulk storage terminals. And it is but one — relatively small — input among several factors used to determine the retail price we are charged for gas at the pump at any given time.

According to ARTBA, these facts are relevant to the current congressional debate on how to fund the federal highway and transit investment program beyond May 31, when the current authorization ends. The program faces a $15 billion per year deficit just to maintain current funding.

In March, ARTBA rolled out a detailed policy proposal to help end the political impasse over how to fund future federal investments in state highway, bridge and transit capital projects.

“Getting Beyond Gridlock” marries a 15 cents-per-gallon increase in the federal gas and diesel motor fuels tax with a 100% offsetting federal tax rebate for middle and lower income Americans for six years.

The plan would help fund a six-year, $401 billion highway and public transit capital investment program and provide sustainable, user-based funds to support it for at least the next 10 years.

Even at this higher rate, the federal gas tax would still represent only 2.2% of the annual cost of owning and operating a vehicle, according to ARTBA’s analysis. But, by fixing roads, bridges and transit systems and funding new capital investments aimed at improving the movement of freight, the American public and business community would save time and money on annual transportation costs, the association says.

View the ARTBA analysis, conducted by the association's chief economist, Dr. Alison Premo Black. She can be reached at 202.289.4434, or ablack@artba.org.