Caltrans Looks to the Sun for Transportation

Caltrans will explore SolaRoad technology which implements the use of solar panels in roadway projects and has been successfully implemented in a project in Krommenie, The Netherlands. 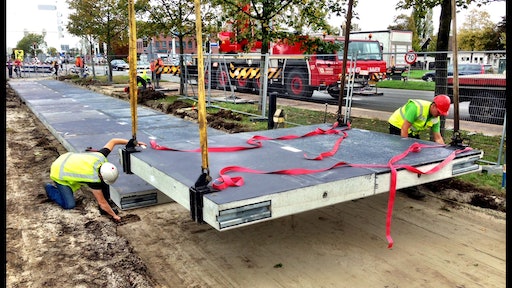 The two-way cycling lane that connects Krommenie and Wormerveer, two suburbs of Amsterdam, is the test section for SolaRoad. The goal is to eventually convert all roads, even those driven by cars and other vehicles, to solar roadways. According to the SolaRoad’s official website, if all U.S. roads were paved with solar panels, the country would produce three times as much energy as it uses today and cut CO2 emissions by 75 percent.

Caltrans will explore the Dutch technology, known as SolaRoad, which implements the use of solar panels in roadway projects and has been successfully implemented in a project in Krommenie, The Netherlands. The idea behind SolaRoad is that sunlight falling on the road surface is converted into electricity by concrete panels with solar cells and a translucent top layer of tempered glass. The generated electricity can be used for street lighting, traffic systems, electric vehicles and households.

“We’re excited to explore the application of solar energy in Caltrans assets – everything from emergency power generation to provide self-sustaining maintenance stations to lighting signs and lamps, among others,” says Dougherty.

California and The Netherlands are leading the way for zero-emission transportation and energy innovation in terms of sales, policies and incentive programs, vehicle research and development and innovation, and education and public awareness. Both states have committed themselves to stringent climate change action programs to meet 2030 goals in terms of greenhouse gas reductions and sustainable energy generation.

In the Netherlands, the first SolaRoad project is a solar bicycle path in Krommenie in North Holland, which opened November 2014 and is being tested for three years.

Caltrans’ District 7 (Los Angeles and Ventura counties) will explore the Dutch technology at its maintenance rest area in Lebec along Interstate 5 in Kern County. The Dutch representatives will join Caltrans on Friday, April 1 to discuss capabilities, possibilities and information exchange.