Engineers, contractors and infrastructure owners all report increased use of BIM, driven by strong business and project outcomes 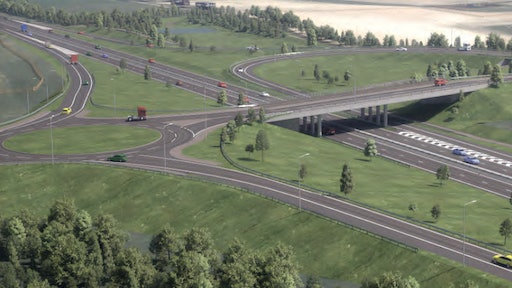 A new SmartMarket Report from Dodge Data & Analytics shows that the use of building information modeling (BIM) is increasing in the horizontal construction market. The Business Value of BIM for Infrastructure 2017 SmartMarket Report – produced in partnership with Autodesk, and with support from Deloitte – analyzes how engineers, contractors and owners are using BIM for transportation infrastructure projects in the US, UK, France and Germany.

It shows that commitment to BIM is skyrocketing among firms who use it, with 52% now reporting they deploy it on over half their projects, versus only 20% of them implementing it at that high level just two years ago. The report is available for free download here.

The new report updates a previous SmartMarket Report from 2012 on the value of BIM for infrastructure in the US, which showed that its use on all types of infrastructure projects significantly lagged vertical building construction. However, the new study suggests that BIM is well on its way to becoming established for transportation in the US and European markets.

“Dodge has been closely tracking the growth of BIM for buildings globally since 2007,” says Steve Jones, Senior Director of Industry Insights Research at Dodge Data & Analytics, “and we have seen steady growth in both its usage and the tangible business benefits that its users receive. It is exciting to now see a similar pattern rapidly taking shape for transportation infrastructure, and the dramatic global growth expected for that segment is certain to accelerate this trend.”

“This report makes clear that BIM is not only for building design, but a ‘must have’ for transportation infrastructure projects,” says Nicolas Mangon, Vice President of AEC Business Strategy at Autodesk. “With a significant portion of the world’s transportation infrastructure funded by taxpayers, BIM reduces risk and waste enabling a more responsible way to design, build, operate and maintain roads, bridges, and public transit systems.”

The majority (87 percent) of BIM users in the study report that they are receiving positive value from their use of BIM, and most believe that they have only begun to experience its full potential. Critical benefits reported by users include fewer errors, less rework, and greater cost predictability, all of which improve project delivery for transportation infrastructure.

In addition to improving project performance, most users report that having BIM capability yields important internal benefits to their own businesses, which include:

Despite the fact that many of the respondents – especially those in France, Germany and the UK – are relatively new to the use of BIM, nearly two thirds (65 percent) believe that they experience a positive ROI from their BIM use, and more than one quarter (28 percent) believe that ROI is 25 percent or greater.

In addition to these top findings, the report features projects that exemplify the value being gained from BIM, including for rail, airports and smart roadways. Other articles in the report explore how BIM is of particular value to infrastructure owners, from the ways it can support city planning efforts to asset management long after construction is complete, including a case study on an ambitious project to model Glen Canyon Dam.

The SmartMarket Report also includes a summary of the use of BIM and the value it provides in the four countries included in the study: France, Germany, the UK and the U.S.