Research papers suggest ideas on how to construct a permanent building on the moon. 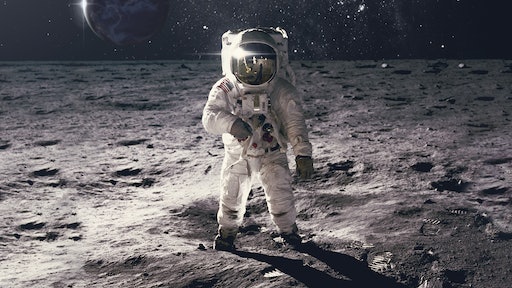 In case you missed it, NASA is looking to return to the moon. Why is this sentence on a concrete website? Good question. Turns out scientists are looking to start construction. This return is marked with the upcoming Artemis mission (scheduled for 2024).

According to a recent research article published by The Royal Society, in order for a permanent habitat, the association has looked to the ancient Romans for design inspiration. The abstract describes the structure as follows:

We describe a polar Moon base habitat using direct solar energy for construction, food production and atmospheric revitalization. With a growing area as large as 2000 m2, it could provide for 40 or more people. The habitat is built like the ancient Roman Pantheon, a stone structure with a top circular oculus, bringing in focused sunlight that is spread out to crops below. The conical, corbelled structure is built from cast regolith blocks, held in compression despite the large internal atmospheric pressure by a regolith overlayer 20–30 m thick. It is sealed on the inside against leaks with thin plastic.

It continues further with more details on the habit structure, including design features similar to the conical dome of London's St. Paul's Cathedral.

Shipping the construction materials would be an expensive undertaking. While the moon's gravity is much less than Earth's, this stuff is heavy. And each pound in lift-off adds to the cost. The paper illustrates this weight difference by mentioning that 850 tons would be 245 tons on the moon. According to the website Inverse.com, "it costs as much as $10,000 to put one point of material into orbit" (Scientists Want to Build a Lunar Habitat Inspired by Ancient Architecture). Author Passant Babie, then adds a great line, "So the less construction material important from Earth, the better."

The research paper attempts to suggest that astronauts should use locally sourced materials for the construction - lunar regolith and rock. However, Rabie explains that alternative solutions have been considered. Rabie writes, "Ideas range from building a habitat made from mushrooms to suggesting that astronauts use their own pee to create a mixture of concrete" and points to another research paper, "Utilization of urea as an accessible superplasticizer on the moon for lunar geopolymer mixtures", made available online through ScienceDirect, published in the Journal of Cleaner Production by Elsevier, February 2020. Rabie, who has a specialization in science journalism, explains this process more. Researchers tested the concept using a 3D concrete printer.

Innovative, yes. Creative, for sure.

But I'd imagine that lunar construction has its own set of different issues. (For one, what's level when there's next to no gravity?)

Who's signing up to be the first astronaut contractor? I hope they don't change specs mid-project.

The most popular stories from ForConstructionPros.com/concrete from November 2020.
Jonathan Kozlowski
December 9, 2020

In the January 2015 issue of Concrete Contractor, we featured the Arctic Passage renovation project at the Henry Vilas Zoo in Madison, Wisconsin. The project is now complete and scheduled to open to the public on May 23, 2015.
May 21, 2015

5 Things I Learned at World of Concrete 2012