A water treatment plant had to dredge and dewater 68,000-cubic-yards of sediment buildup prior to construction allowing the plant to meet new EPA standards 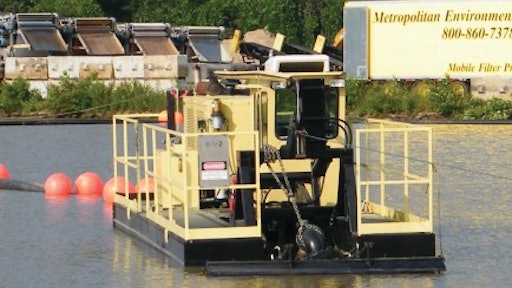 Dredging and dewatering the Quarles Raw Water Reservoir in a six-month time frame meant doubling the equipment normally used for a project like this one. One piece of equipment used in the dredging process was the Mud Cat SP-815.

The Stage 2 Disinfectants and Disinfection Byproduct Rule (Stage 2 DBP rule) of '05 tightened the requirements for two groups of DBPs. The Cobb County-Marietta Water Authority (CCMWA) in suburban Atlanta serves 350,000 people and has two water treatment plants and reservoir built in 1952. To meet the new Stage 2 standards, it had to add granular activated carbon filters to its treatment processes. This requires taking one plant at a time off line during the construction phase, greatly reducing treatment capacity and system redundancy.

During the planning phase of the project, the Quarles Raw Water Reservoir was found to be half filled with sediment, creating both treatment and capacity issues. The reservoir serves as an equalization basin between the Chattahoochee River and the CCMWA's two treatment plants.  It was designed with a capacity of 25 million gallons. However, since its last dredging in the mid-1970s, sediment flowing in from the river and from treatment "backwash" from the plants had reduced capacity by half.

The reservoir contained an estimated 68,000 cubic yards of sediment and treatment plant residue that would have to be pumped out and dewatered. Because the sediment contained treatment residuals such as alum, the dewatered "cake" would require disposal at a Subtitle D landfill. The reservoir is located near a residential neighborhood, so noise and traffic were important factors. There also was the issue of coordinating the work at the reservoir with work going on at the James. E. Quarles Water Treatment Plant.

"This project required extensive planning and coordination," said Andrew Lovejoy, P.E., of Civil Engineering Consultants of Marietta, Georgia.  "Because of the work being planned at the two treatment plants, we had a very difficult deadline to meet, about six months."

Heavy Constructors, Inc., of Marietta, Georgia, was awarded the job, and they immediately called in Bio-Nomic Services and Metropolitan Environmental Services, which are sister companies in the Carylon Corporation. For most dredging and dewatering projects, only one subcontractor would be needed, but the timeline for this job required both companies working simultaneously.

Dredging and dewatering the Quarles Raw Water Reservoir in a six-month time frame meant doubling the equipment normally used for a project like this one. One piece of equipment used in the dredging process was the Mud Cat SP-815.

Bio-Nomic Systems brought in four mobile belt presses and Metropolitan contributed four recessed chamber presses. Floating dredging equipment was put into the reservoir. As the sediment was removed it was dewatered, then the resulting cake was trucked to an approved landfill.

Shortly after the dredging work, engineers took the opportunity to drain the reservoir to do some armoring and maintenance work on the banks and sluice gates.

The dredging and reservoir rehabilitation project, the largest dredging and dewatering project in CCMWA's history, ended just in time for serious work to begin at the treatment facility. The project was compressed into half the time it would normally have required in order to meet construction deadlines necessary for the district to be in compliance with new EPA guidelines.